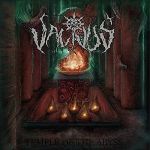 It’s been a long time since I wrote a review, but some great albums have been released this year from different genres. But (to me) what really was a delight was hearing about few bands that took a while to release new albums and did it this year (NECROVATION, MAIM) and one of those bands is VACIVUS. Now, let’s go back with a bit of history about the band. All of the members from DAWN OF CHAOS minus Paul Hartburn, who was the vocalist of that particular band, are now active and full time members of VACIVUS, and while VACIVUS released a few EPs and demos it took a while for them to release a proper debut album. Since the release of their first EP, 3 years passed for VACIVUS to release “Temple Of The Abyss”, while all the members are / were busy with other projects. After the tremendous success of CRUCIAMENTUM’s debut album “Charnel Passages” (sales and reception) it was a natural move from Chris Bruni (Profound Lore) to sign and release the VACIVUS debut album. Ok, enough with the history and facts, let’s go straight to the core of the sound and feeling found within “Temple Of The Abyss”. I have to be fully honest with you, the first thing that came to my mind when I heard the intro track ‘Premonitions’ I knew this album was going to be on the same level as bands such as DEAD CONGREGATION, CRUCIAMENTUM, GRAVE MIASMA, etc. The guitars sound very familiar, closer to what their fellow countrymen recreated with their INCANTATION-ish influenced albums, but this time I hear a bit more note separation and less down-pick riffs, the sound is also more open and less compressed. Drums and bass follow the same sonic assault of the guitars but can be heard on side of the mix, not entirely swamped by the vocals and guitars. The vocals are more dynamic to what you can find in the other oppressive dark Death Metal bands, the vocal overlap comes in 2 flavors, one raspy and the other one the guttural down tuned type of vocal that mixed together sound very tight. Also the overall production makes the album feel more fresh and in your face rather than drowned and obscure, adding a sense of melody on top of the leads. The question is “does VACIVUS debut bring something fresh and different to the dark Death Metal realm”? The short answer is: no. But the way the album was build and the overall sound of the record will give you a different perspective than the usual sound brought by other acts in the same league. If after listening to the latest INCANTATION album you felt the need of more, check the VACIVUS debut / non-debut album, it will sure put some of that inner fire to rest. Go grab yourself a copy from VACIVUS or the Profound Lore website at www.facebook.com/vacivus, www.profoundlorerecords.com