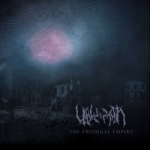 A little info kit as for starters. The Vale of Pnath (or Pnoth) is a vast pit in H.P. Lovecraft’s underworld. The vale is filled with a mountain-sized heap of bones and Night-gaunts often carry helpless victims to the vale, where they are left to die. So there. Then to move further on, what you get if you combine the following words into one steady wholeness: Melody. Technicality. Trickiness. Talent. Brutality. Nah, YNGWIE MALM$TEEN is not the right answer I was looking for this time: it’s Denver’s VALE OF PNATH; 5 musically hungry and innovative guys who are capable of performing quite an incredible instrumental masturbation as well, Death Metal being solely their specific genre of love.VALE OF PNATH fall into the same technical and progressive Death Metal category as OBSCURA, THE FACELESS, NECROPHAGIST, ORDER OF ENNEAD and some others. There’s even a few elements within their sound that bring DIMMU BORGIR to mind; those ultra-fast parts combined with some snarling Black Metal type of vocalism, I mean. On the band’s debut record, "The Prodigal Empire", the guys in VALE OF PNATH, have set a high standard for themselves song structure-wise at least: None of the songs having been featured on their debut, sounds like a half-assed effort but extremely thought out in every single detail. Sometimes the songs have so much going on in them that it makes it pretty hard to follow them that accurately – or at least it takes several listens until you can digest all of them properly enough, spotting all those hiding, tiny details in them. However,"The Prodigal Empire" is thoroughly a kick-ass release from VALE OF PNATH; true fireworks for any fans of brutal and enviously technical, modern Death Metal. It’s gonna be interesting to see where they will go from this record as far as the technical aspects of their stuff are all concerned. Time will obviously tell. www.myspace.com/valeofpnath