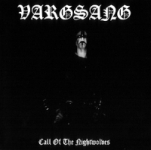 Even though I like this record a lot, I’m not quite sure about the real intention of it. VARGSANG is the solo project of the GRAVEN vocalist Vargsang and "Call Of The Nightwolves" didn’t turn out more experimental or any different from his main band (so, where’s the point of releasing a solo record then?). What you get here is simply another dose of very basic and raw Black Metal, completely composed and performed in the wellknown, northern old school tradition. It actually often reminds me on an early BATHORY meets HELLHAMMER type of mixture. BATHORY for the overall evil and aggressive atmosphere and HELLHAMMER for the simplicity in the songwriting department. The vocals of Vargsang already knew to convince me on the GRAVEN releases, and they still do here! This is the type of Black Metal voice I totally worship: sinister and raw, but never shrieky or hysterical sounding, as many other corpsepaint fellows often tend to sound like. His way of singing simply has a lot of this grim feeling to it, which perfectly fits the traditional raw Black Metal style. The eight featured songs (plus intro) are all of a similar class, mostly played very midpaced to fast (without any annoying highspeed blasting) and certainly won’t let any die hard Black Metal lunatic down. So, all in all a good one, but another GRAVEN album definitely would’ve been more appreciated from my side (as there’s already way too many projects flooding the market). Label contact: www.undercover-records.de P.S.: I just got the info that this ain’t a solo project, but a real new band of Vargsang as he has completely left GRAVEN.