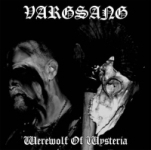 In today’s extreme Metal scene, and with countless of releases every month, it becomes quite frustrating to look for a good release that will satisfy your needs for quality in extreme Metal. Quality that decreases slowly in the big pile of mediocrity released nowadays. Sterile productions and computer generated bands are drowning this everywhere. Add to that the fact that some labels are doing promotion with a quite limited budget or have very few time to do so and things will be even more difficult. Sometimes the only source will be a fanzine (or webzine) but then again few of them have their integrity intact, like this one you are reading. Frank told me about this band being a great release. And as I already know and enjoy many of the Undercover Records roster, I approached this one with confidence. The only reference I had beforehand of this German band was the relation with the band GRAVEN a band which I have in high regards. Well, VARGSANG goes in a very similar style of Black Metal. The main reference in this case will be early BATHORY and early DARKTHRONE, but also I can hear subtle early MAYHEM sound. The band is also doing a few solos here and there, and they do it in a very convincing way. Also they are wise enough to have a good and powerful production, yet maintaining a raw sound to it. If I am not wrong this was all recorded in a rehearsal-like environment, as it all seems to be recorded live yet with subtle studio work to keep the primordial intensity. Their Black Metal style does not exactly keeps the same tempo all over, there is a variation between and in the songs, from some faster ones to more mid-tempo ones. There is a subtle melody involved in most of the compositions, yet it all have a macabre atmosphere. This is quality Black Metal played with passion and with no compromise. Still, I do prefer GRAVEN to this one, possibly for having more powerful vocals and a more present guitar sound, but this one is a contender. This is actually their third release, and so far few changes have been between those discs, so it might also be a good idea to check out their previous material. By the way, the name of the band is Norwegian for “wolf song”. I guess those animals will be a nice companion while listening to this in a full moon night… www.undercover-records.de