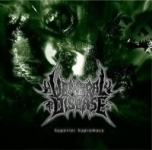 This is the new offering from these technical Death Metal veterans from southern Germany, and the second one under the flag of Revenge Productions. Formed in 1994, the four-piece released several demos as well as four albums so far. Their musical pathway has consequently been developed since “Perpetual Pain Procedure”, the second Veneral Disease full-length and the last one I was confronted with, but everything sounds more mature now (of course…). What we get here is an intense dose of early 90s Death Metal with both really fast blastbeat-driven and midpaced songs. The outstanding guitarwork is another strong trademark of these maniacs (sometimes even reminding on older Necrophagist or the fellows from Deadborn) and leaves an impressive mark on the ten featured tracks (including the short first one which serves as some kind of introduction). If I’m informed correctly, this is already the second CD recorded by the band on their own – respect! A brutal and thick, yet clear sound pleases the listener’s ears. Also the professional and stylish layout was done by the band itself. Check these guys out, they deserve it: www.veneral-disease.de, www.myspace.com/veneraldisease