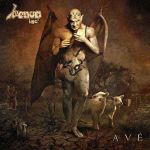 VENOM INC (who feature the power trio responsible for such albums as "Prime Evil", "Temples Of Ice" and "The Waste Lands" which are all classic VENOM albums in their own right) have wasted little time in delivering an album full of new material and are most definitely out to prove that this incarnation of the band means business and is not just a live band only relying on playing old classics. VENOM INC and its members Abaddon, Mantas and Demolition Man sound energised and full of musical fire on this debut offering for Nuclear Blast. The opening track ‘Ave Satanas’ explodes out of the speakers, goes straight for the throat and sets the bar and pace for the rest of the album. There is a good mix of tempos but when they speed things up they really go all out. The track ‘Time To Die’ comes across sounding like the best song SLAYER never wrote such is the intensity and all out aggression that hits you like a ton of bricks! The 3 piece shift musical gears quite often throughout the album and keep things varied but there are other songs as well as the aforementioned track that rear their ugly heads throughout and mainly stay full throttle and fiercely thrashing. The drumming of Abaddon pounds like a relentless jackhammer set to maximum, the riffs of Mantas are heavy, sharp and crunching, really showing what a talented guitarist he is and Demolition Man puts in a very powerful and commanding vocal performance, snarling and spitting out his vicious vocal lines like a man possessed. The songwriting is also top notch too with each track being maliciously memorable. VENOM INC have made a musical statement of intent with this album which should silence quite a few detractors and they have made an album that stands up very strong against the members collective back catalogue. This is a powerhouse of an album full of raw energy and potent precision from start to finish and it also has more hooks than a north sea fisherman. "Avé" is a deadly and devastating aural assault and showcases a band who are well and truly firing on all cylinders and the closing track ‘Black ‘n’ Roll’ finishes off the album on a hellish high and is a song that blatant VENOM worshippers such as MIDNIGHT would be proud to call their own. Lay down your souls to the gods of black rock’n’roll!! www.facebook.com/venomincofficial, www.nuclearblast.de