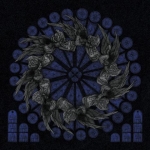 Choosing a name of a band is always something special, since it represents the artistic unity of the gathering of individuals who got together to play music. Having this in mind the band’s name VI is simply dull, I really have no clue what it may hint to. The Latin number six / 6? Whatever, one of the most meaningless monikers I ever got to know. But fortunately the debut by this French trio is on a much higher level. Frightening and ferocious Black Metal, combing sheer aggression with an unholy atmosphere. Of course this description probably fits for nearly all genuine Black Metal releases, but VI managed to so some things better than other. First worth mentioning the cleverly thought out songwriting. Nearly exactly the right mixture between blast-beats, mid-tempo and even slower drumming. Every time when you think it is getting boring the the tempo changes and the listener (or at least me) is pleasantly surprised. Since Metal in general is all about that riffs, be assured the band worked out some fine Black Metal tunes, picking the best riffs of the last 20 years and melting them into something which is not really new, but refreshing. The sound simply fits perfectly for a Black Metal album, throughout the whole running time there are no fillers… to make it short, there are no weak points to criticize. Having their latest outputs in mind, "De Praestigiis Angelorum" ("About The Illusion Of Angels") is the album GORGOROTH or MARDUK did not manage to create. www.facebook.com/vithdevotion, www.agoniarecords.com