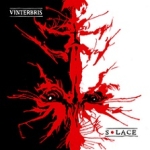 The second album by VINTERBRIS from Norway seems to be fallen out of time. More 1994 than 2014. “Solace” starts with some acoustic guitar tunes, then the drums set in and at that early point you know not what will happen next. Could be anything from Death to Black to Viking or any kind of music. But there is just that short moment at the beginning and after less than two minutes you knows what is going on. Melodic Death / Black Metal the way UNANIMATED, early IN FLAMES and DISSECTION used to play. A well balanced mixture of fast and mid-tempo parts, accordingly some acoustic guitar interludes. The riffs are melodic and sometimes they sound majestic, exalted and noble. A song like ‘The Aura Of Despair’ is on the same level with DISSECTION’s ‘Storm Of The Light’s Bane’. Another source of inspiration are IMMORTAL during the “At The Heart Of Winter” era. Which means more classic Heavy Metal like riffs. Everyone compares the music to the stuff one knows, and especially the more classic Heavy Metal parts combined with fast played Death Metal let me think of “The Storm”, the debut by ETERNAL AUTUMN (SWE) released 1998. The vocals are done with some variety, mostly grunts but some nice shrieking is added from time to time. But the best moments are just those instrumental parts reminding me of IMMORTAL and DISSECTION. Furthermore the album benefits from the short playing time. Six songs in 36 minutes, so the trap of sounding too epic without getting to the point is avoided. This album definitely must be checked out by fans of DISSECTION and IMMORTAL (during the epic “At The Heart Of Winter” period). www.facebook.com/pages/vinterbris/142141595826209, www.nordavindrecords.com