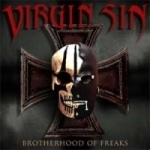 After the 10″ record that a good friend of mine from Sweden who owned To The Death Records was kind enough to send over like two years ago. I had heard a lot about this band but never actually “heard” them. I had read somewhere that they were a Heavy Metal / Rock act that had been kicking around Sweden since 1983! But hadn’t made it past even their first gig before they found their way back to whatever make-up clotted sewer they had crawled from and at once disappeared as fast as they had arrived! Checking out the VIRGIN SIN 10″ record entitled ” Make Them Die Slowly” (not to be confused with WHITE ZOMBIE’s 1989 LP of almost the same title “Make Them Die”), honestly I didn’t get what all the hubbub was about. This record was to be their first studio effort originally to be released in 1992 almost an entire decade since their inception!? So was this vinyl album almost ten years in the making something monumental to behold? No. Ground-breaking? No. Worth the wait? Ahh… No. In truth if I had never heard of this band before and absolutely knew zero about ’em prior to placing the needle to this vinyl, I am positive the experience and the end result that I got I am sure would have been exactly the same. VIRGIN SIN sucks. How a band that has been in the music industry for as many years as METALLICA, DIO or SLAYER have been signed, out touring, kicking ass or reigning all over the earth. I find it extremely hard to believe that this band has only gotten this far in all that time, and thus created such a limp attempt at a Metal offering with their loose brand of overly simplistic, mildly tempered Thrash / Rock and actually has it for sale, let alone for $13 dollars to offer to the buying public! Outrageous I thought. VIRGIN SIN isn’t worth $5 bucks to listen to! Now two years and some months later from the Metal folk at Mondongo Canibale Records have VIRGIN SIN’s follow up to that debut record with “Brotherhood Of Freaks”, and as you may imagine the same formula continues onward with just more of the same unadulterated rehash and boring crap that this band, I am assuming, is proud to be known for. If any advice could be given to you o’Metal consumer avoid this disc at all costs. Your wallet will thank you and I will thank you. P.S. For the sake of not having to send VIRGIN SIN an entire roll of toilet paper to dry their eyes with after reading this review, I will spare you and them with my opinions of this band being called “one of the very first Black Metal bands to ever hail from Sweden” , as their bio states. Give it a fucking rest already, huh? Contact: www.virginsin.net or info@virginsin.net or www.mondongocanibale.com