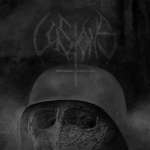 The first full-length released by the Spanish Black Metal up-and-coming trio from Madrid, following two EPs, "Deathmaggedon Satanic War Machine" (2012) and "Premonition 666" (2014). From the previous works, in which VISIONS presented a more Black / Thrash oriented sound, both in tempo and structure, comes a more blackened and extensive effort (with the shortest track clocking around 7:29min). Each of the four tracks has its own intro, establishing an eerie ambiance, be it more chaotic, in ‘Visions Of A Fallen Empire / The Cataclysm’, or serene, in ‘The Last Cry For Freedom / Victory Or Death’. Besides working as a mood setter, the overall sense of "social chaos" is achieved through these reocurring excerpts, serving as a complement to the belligerent nature of the lyrics. On regards to the instrumentation, the sound reached in the album is very akin to War Metal, sounding like a more cadence-focused version of what BEHERIT and SARCÓFAGO used to do. The blast-beats are a constant, pouring a nonstop attack with the harsh guitar and mantaining the high tempo for the entirety of the lenghty tracks. The unexpected and well placed turn comes with a handful of powerful rhythmic sections that highlight the insane speed of the great, if somewhat quick, guitar solos. To draw a more precise comparison, VISIONS is the atmospheric and metric counterpoint to REVENGE, without losing any of the bestiality. Further info at: www.facebook.com/visions-unholy-metal-171990586260261, http://visions666.bandcamp.com, www.blackseedprod.com