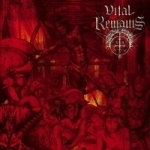 This was definitely one of the CDs at least I anticipated the most and hellish thanks to the infernal Lord, it is finally in my filthy hands. DEICIDE’s controversial frontman Glen Benton teams up with VITAL REMAINS mastermind Tony Lazaro (guitars) and Dave Suzuki (bass, lead guitars, drums) to "Dechristianize" this rotten world, but do they succeed? They fucking do!!! This 60 minutes long (no bonus or hidden track crap) epic inferno that’s blasting relentlessly out of my speakers for hours now is one of the Death Metal highlights this year. I can hardly imagine which bands could top this incredible effort, maybe the new MORBID ANGEL, but that’s it! "Dechristianize" is violent, hymnic, full of technical finesse and variation and should convince anyone who disliked Glen Benton in the past and doubted his qualities of the opposite. His vocal work is devastating, his voice thrones upon murderous riffs, sinister melodies and the aggressive hammering drums. Songs like the title-track, ‘At War With God’, ‘Saviour To None, Failure For All’ or the closing 10 minute long masterpiece ‘Entwined By Vengeance’ (featuring those Spanish guitars one could witness on the previous album "Dawn Of The Apocalypse") combine sheer brutality and triumphant melodicity that prevents the album from getting monotonous perfectedly. I always try to be cautious with superlatives, but "Dechristianize" is simply one of the best albums I have heard in the last three years and it will still be remembered in ten, I’m sure of that. Unleash this monument of unholy intensity in your CD player and you will be consumed by purest evil… For additional information, such as release date etc surf to www.centurymedia.de. 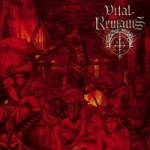 VITAL REMAINS need no introduction. For 24 years, the Providence (how fitting), Rhode Island, band has savaged listening ears with firmly anti-christian, blasphemous, Death Metal. I can scarcely believe it, but “Dechristianize,” the band’s 5th studio album, hit stores 10 years ago! It was, for VITAL REMAINS at least, a different album: Glen Benton of DEICIDE assumed lead vocal duties. Bear in mind this was 2003, a little before DEICIDE’s “Scars Of The Crucifix” album, and that’s the style Benton brought to VITAL REMAINS: deep growling, roaring, and so on. He does an admirable job, and certainly sounds more passionate singing for VITAL REMAINS than he did for DEICIDE at the time. If there was a word that perfectly described the VITAL REMAINS sound, I would bet that word is “thunderous”. Everything about VITAL REMAINS is larger than life. The production on “Dechristianize” is polished, but also very loud; every instrument fighting for attention. One thing which distinguishes “Dechristianize” from the rest of the VITAL REMAINS discography is the Yngwie Malmsteen inspired guitar solos, which can last so long the rhythms change around them. But if that worries any fans, fear not, for songs such as ‘Infidel’ blast, rip, and obliterate doubt. ‘Devoured Elysium’ recalls the overpowering darkness of earlier albums like “Into Cold Darkness”. Unfortunately the soloing tends to grate on the ears – not because the licks aren’t beautiful, but because they don’t seem to fit in the demonic onslaught very well. They’re just too happy – joyful, if you will. And they tend to lengthen songs that don’t need extending. ‘Devoured Elysium’, as I mentioned, a great song, nevertheless wears it feet down by running for a minute longer than it should. Overall, “Dechristianize” is a beautiful album, but in my view it teeters between two directions, or two moments, rather, in VITAL REMAINS history. On the one hand the old, crushing, darkness of early-to-mid career VITAL REMAINS is there, but on the other, highly polished and excessive soloing pulls the album in another direction. Although, the song ‘Savior To None’ shows that the two styles can meet together, and not compete. But the album does seem to get pulled in different directions most of the time, making for an enjoyable but oftentimes puzzling listening experience. Century Media’s re-issue comes with a bonus live disc. It sounds incredible, like a full blown live album that required meticulous mixing at the soundboard to make it sound this good. If anything this live disc should inspire listeners to check the band out live, for the skill and clarity of sound is truly impressive. They come awfully close to replicating their studio sound in the live setting. The setlist mostly consists of songs from the “Icons Of Evil” album, which came out 4 years after “Dechristianize.” So, one wonders why Century Media didn’t put out a setlist from the “Dechristianize” tour, but hey, at least we get to hear how skillful VITAL REMAINS is in the live setting (the bonus disc is just the audio version of VITAL REMAINS’ live DVD "Evil – Death – Live" – Frank). There’s definitely enough demonic brutality on both of these discs to satiate Death Metal’s hungry horde, but as I mentioned the solos stand out, sort of distract because they’re so different from the songs – although they do sound much, much better live. Worth it!!!! Hail VITAL REMAINS! www.facebook.com/pages/vital-remains-official/294554723911556, www.centurymedia.com