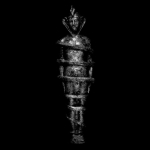 The name VOIDS OF VOMIT sounds rather unfamiliar, despite the fact that the Italian outfit is around for more than a dozen years now. On the other hand, it’s no wonder that this band is not a well-known name of the underground. The two song EP “Ritval Expiation” is their first sign of life since 2010, so six years have passed since their last release. Add a split LP and a demo, and it can only be stated that the discography of VOIDS OF VOMIT is overseeable for a band active that long. Maybe it’s because they deliver quality instead of quantity. But, alas! This new EP does not exactly prove that. Both songs, ‘Ritval Expiation Of The Parracide’ and ‘De Fetialivm Ritv’ are not really igniting a fire, even though they’re solid stuff. The riffs and in those pig-squealing moments also the vocals somehow remind me of CARCASS, mainly in their more mature incarnation, but without reaching the impact and quality of the Brit legend. It’s just the final spark that’s missing in the stuff of VOIDS OF VOMIT. But I’m pretty sure that someone who is disappointed of the latest CARCASS release might dig this EP. In case you’re likely to be one of those, I’d advise you to check the band out at www.facebook.com/voidsofvomit or http://voidsofvomit.bandcamp.com. Or visit their label: www.facebook.com/unholydomainrecs 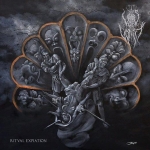 VOIDS OF VOMIT is a Death Metal act coming from Italy and “Ritval Expiation” is their fourth official production. This stuff was originally released as a 2 tracks tape. The CD version, released last year by Everlasting Spew Records, contains 4 additional tracks from their split with MORBID UPHEAVAL, released back in 2010. So, technically this is a compilation. The first track here, entitled ‘Ritval Expiation Of The Parracide’, starts with some kind of keys intro to give way to a mid-tempo Death Metal composition that becomes a faster one after. The second track, ‘De Fetialivm Ritv’, is faster than the previous one and offers a good dose of pure fucking Death Metal in the old way. Simple, catchy, effective riffing and good drumming, plus some keys from time to time, that remind me of the way how PESTILENCE used them on the “Consuming Impulse” album, make this a good EP, just a bit short. As I already mentioned, the third to sixth track belong to a different production, so this one is slightly different, although the music keeps in the same way. ‘Initiation Into Impvrity (Bones Arovnd Vs)’ and ‘Brigade Of The Old Skvll’ are two perfect tracks to bang your head on the wall. Both are fast and fucking brutal. The last track here is an ASPHYX’s ‘Rite Of Shades’ cover that is OK, even if it’s really difficult to beat Martin van Drunen’s work! The vocals sound like a cross between Stephan Gebédi (THANATOS) and Joe Lewis (VITAL REMAINS). VOIDS OF VOMIT’s music is strongly influenced by legendary acts such as BOLT THROWER, DISINCARNATE, ADRAMELECH or CARNAGE, to name a few, and it works very well for my taste. A good production make this a perfect addition to your collection. Get it from www.everlastingspew.com and follow the band at www.facebook.com/voidsofvomit