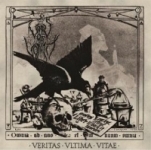 The first I’ve ever heard of this fine band, and the best way I can think of to introduce yourself to them, this EP stands among the surprisingly many outstanding releases this year. The soil in Hell is fertile indeed. VOIDS OF VOMIT come from Italy, a country whose long repute no one needs reminding of, for we all know it intimately (BULLDOZER, PAUL CHAIN) Their Metal is part of a new chapter in Italy’s Heavy Metal history. For the last six years or so countries in and around the Mediterranean produced several extraordinary bands between them; bands that closely borrowed from the darkness wrought by early INCANTATION and supplanted MORBID ANGEL’s prayers to the Ancient Ones, resulting in some of the greatest modern Death Metal albums. This, roughly, is the lineage to which VOIDS OF VOMIT belong. Their Death Metal is strong and punishing – but it is also ornate, dark, rich, and lyrical in movement. I would like to see more of this kind of thing, quite frankly. The band tastefully chose to cover DEATH’s ‘Corpsegrinder’ as the last track on the EP. That is something I could do to see more of, too – when it’s done right. We all know how often covers wind up deforming the original songs. VOIDS OF VOMIT did a fantastic job, and that’s no small feat considering who they covered. A band who can cover a DEATH song and do a decent job of it deserves some attention. www.myspace.com/cultofvomit, www.birdofillomen.com