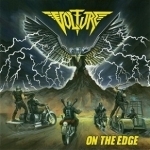 Another good example of traditional Heavy Metal, from this American band. VOLTURE reminds me of those obscure Heavy Metal bands released on smaller labels back in the 80s. They have at times a semi Speed Metal approach à la early ANTHRAX, but the music has more roots on traditional Rock. I like the vocals as they also sound quite very 70s and also reminds a bit to Mr. Turbin. This five piece was formed back in 2008, and some members also play in MUNICIPAL WASTE and TWITED TOWER DIRE, but hardly the music here has something to do with those bands. Lyrics are mostly about riding bikes and hanging out having a good time. The production values are very good, and I can even sense that they eve captured some of the essence of the mid 80s Metal sound. The final song ‘Deep Dweller’ on this album reminds me a lot of IRON MAIDEN. So, after a few more listens, I find this one to be a good album of traditional Heavy Metal, which is quite above average from a band that is worthy to keep an eye in the future, as they have very much the potential to soon or late claim a place in the monarchy of true Heavy Metal. www.volture.us, www.facebook.com/voltureofficial, www.hrrecords.de