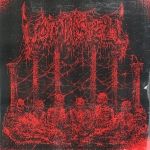 VOMIT SPELL, a rather new band from Germany that had one demo released in 2019, shoots off their debut album. First it has to be noticed that the sound from the demo days has hugely improved, but retained an old school feel. And that is the most noticeable thing which makes VOMIT SPELL to stand out from the mass of other bands – they’ve really nailed that rough, abrasive sound of ’90s classic albums. The compositions are well varied and tempos range from fast, mid-paced, descending down in doomy passages and bursting out with grinding ferocity. So the whole spectrum of grinding Death Metal mixed with dirgy Doom has been well served. Tracks like ‘Carnage At The Morgue’, ‘Contamination Void’, ‘Disincarnate’ or even the Black Metal tinged ‘Leah Sublime’ show that variation and make for an enjoyable ride on those deadly waves. There are also a couple totally crusty Grindcore inspired tracks – ‘Axiom Of Annihilation’ and the closer ‘Antthrpophagous Inhumation’ – which totally worship at the altar of TERRORIZER and their influence together with old AUTOPSY and NIHILIST comes forth more than on one occassion. That punky feel underlines most compositions and keeps the head banging. VOMIT SPELL has put out one of those rare debut albums which keep growing on you with each listen, so get down to their site and give it a spin. Band info: www.facebook.com/vomitspell, label: www.fda-records.com