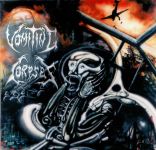 VOMITING CORPSES from Emden in Lower Saxony was one of the first Death Metal bands from Germany and were already founded in 1988, and therefore they relish a kind of cult status in the underground, especially in Northern Germany. Their first demo "The Call" was released in 1990 and followed by their second demo "Cold Blood" in 1992. This second demo marked a big step forward and the band finally managed to ink a record deal with the defunct label Invasion Records, where their first and only full length "Coma: The Spheres Of Innocence" was finally released in 1994. The band was not happy with the output, as the production was messed up by the studio technicans and had some sound mistakes on it. The basis sound of the band was old school Death Metal influenced by US bands like IMMOLATION, MORBID ANGEL and POSSESSED. As the Gothic / Death scene was developing in Europe back then and got more and more popular until the mid nineties, VOMITING CORPSES also developed their sound into a more and more melodic direction and included melodic passages into their sound, as well as slight Hardcore traces like early TYPE O NEGATIVE did with their early CARNIVORE roots. The mixture might sound weird but worked out pretty well and marked a natural development into a more melodic Death Metal, influenced by bands like ANATHEMA and made this debut output a very enjoyable journey. The material still is very enjoyable today, when you are into old school 90s stuff and like to dig in old little treasures like I do. After this release, two band members left the band to start ANASARCA and the rest continued with two new members until the band finally splitted up in 1996, when mastermind Frank Spinka left the band. In 2007 Spinka reformed the band for a small festival in Emden with a complete new line-up and somehow the band still seems to be active, but without any musical sign until now. As bonus, their "Cold Blood" demo has been included as well onto the disc and the whole release with its total 15 tracks is another worthwile trip into the German Death Metal underground history and for collectors a recommendable output. www.facebook.com/vomitingcorpses, www.wardeadrecords.com