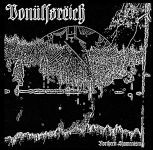 VONULFSREICH, is a Finnish Black Metal act, which so far released eight EPs, one demo and only one full length album. They initiated their journey back in 2012, and “Northern Shamanism” was their debut release, which was initially released by No Fun House (CD-R, limited edition), and now received a CD re-issue by revered Fallen Temple. As I have never heard anything from VONULFSREICH before, I had absolutely no idea what this band is about or the sound of their recordings. There are four tracks here, and to my astonishment, it’s solid onslaught of pure, cold and invocating Black Metal. In the opening exposure VONULFSREICH sounds a lot like early DARKTHRONE here – of course there are dozens of other similar bands, but let’s be honest, they all are influenced by DARKTHRONE anyway. But when a band plays this harsh and sort of simplistic, primitive Black Metal where the songwriting is solid and there are evil vocal utterances, damn possessive riffs, ritualists drums patters (that are never trying to overpower), good variation in the playing – with atmosphere that varies from melancholic to cold and grim, then that’s always better and enticing than average primitive hateful Black Metal. And in that sense, if we put any comparisons aside, VONULFSREICH actually play traditional Black Metal that holds cold, grim and hateful air of Finnish school, yet beholds the simplistic movements of the Norwegian school. “Northern Shamanism” belongs to both zones and add the lyrical context of shamanism, ritual and age-old invocating rites. Those expressed with bitter melodies in ‘Gateway (By The Hill’s Eternal Eye)’, harsh feelings and viciousness in ‘Black Metamorphosis – Deerhorn Trance’ and mysterious invocation in ‘Northern Shaman’, will be enough to enchant any unanticipated ones. No wonder, it’s short – because there is less than 23 minutes of music – but it’s enough to suggest “Northern Shamanism” for any die hard and open-minded follower of the classic era. Needless to mention, “Northern Shamanism” is an invitation by VONULFSREICH, to delve further deeper into their menacing, ritualistic and darkness infested discography with later releases, like “Sepulchral Silence”, “Sovereign Forest”, “Spell Of Thunder” or “Waiting For The Moon” – that keep on enriching the forever alluring Finnish Black Metal. Explore more about the band and label here: www.facebook.com/vonülfsrëich-764485383640064, www.facebook.com/fallentemple666.