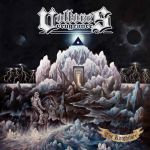 During the second Heavy Metal wave at the end of the 1990s, the Italian Metal scene finally got the attention it deserved. Especially the Epic and Doom Metal acts from the “boot” blew up some dust, mainly in the underground, with acts like DOOMSWORD for example. But even though it seems that there aren’t that much of those more classic bands around in Italy, there are some new acts every now and then. VULTURES VENGEANCE from Rome is one of those bands, although the term “new” is not really correct here. The four piece was formed already a decade ago, but it took them six years to even release a demo tape. Four years and two EPs later, “The Knightlore” is here, the first full length album from VULTURES VENGEANCE. And it’s a pretty successful attempt to revive the days of classic Heavy Metal. Despite the fact that I’ve always read that VULTURES VENGEANCE named acts like MANILLA ROAD and CIRITH UNGOL among their greatest influences, the songs on “The Knightlore” are neither of an over boarding epic style, nor are they as dotty as their heroes. Instead, I hear a huge impact of classic, more galloping NWOBHM stuff, mixed with some early US Metal stuff, especially the first OMEN albums or QUEENSRYCHE on their EP came to mind. The high pitched vocal delivery of Tony T. Steele that often culminates in high screams fit as perfectly as the not too modern, slightly tinny sound. The songwriting might be the only thing that could have been a little better, in some moments I miss the real hooks in the pretty long and rather diversified songs. Nevertheless, songs like the opener ‘A Great Spark From The Dark’, ‘Pathfinder’s Call’ or the epic ‘Dead Men And Blind Fates’ are pretty fine songs and quite a good statement how classic Metal can still be relevant in its third adolescence. Visit VULTURES VENGEANCE at https://vulturesvengeance.bandcamp.com, or their label, which is by the way a sub label of Cruz Del Sur, at www.gatesofhellrecords.com