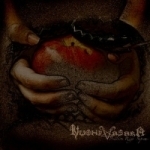 VUOHIVASARA ("Goathammer" in English) come from a cold and dark Nordic land – not from Norway this time but Finland instead. Finland has also had some traditions for noteworthy Black Metal acts over the many years – and everyone surely knows such names from the Finnish underground Black Metal scene nowadays as BEHERIT, ARCHGOAT, BARATHRUM, HORNA, AJATTARA, CLANDESTINE BLAZE and SARGEIST, just to name these 7 hordes of evilness as good examples. VUOHIVASARA have been around for 7 years – and released 3 full-length studio within this period of time, off which their latest release carries the title "Perdition Reigns Supreme". Listening to this record, makes me think of a band that has lots of potential in them that might even carry the band onward the same big league where bands like SATYRICON, DARKTHRONE, MARDUK, DARK FUNERAL and some others, have already redeemed their own places from. Then again, I can also see a band in here that obviously does not bring any new elements into the same pool of black blood but simply circulates some of the most known and used Black Metal ingredients effectively for their own purpose – just to get heard and perhaps seen eventually even. There’s absolutely nothing wrong with that – and in all honesty’s sake I gotta admit I do like these penguins’ (hey, there’s a positively sarcastic tone in my voice) slightly DARK FUNERAL-tinged – at times blindly fast, and then momentarily even amazingly melodic and catchy Black Metal assault, quite a bit. VUOHIVASARA know their stuff – and without the shadow of a doubt, are certainly capable of appealing a big part of the blackest legions worldwide. It’s just that the stuff on "Perdition Reigns Supreme" really does not offer any surprising moments but brings fire and brimstones out from the abyss as we all know these elements already. But that’s what we like – and what matters mostly for us anyway, so give ’em a fair shot – and they’ll give you some hell back in return. Lurk more at: www.vuohivasara.cjb.net, www.inverse.fi