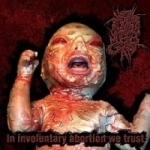 It seems that ultra brutal / visceral / gore / extreme / grinding Metal, can be a scene on their own. And most of the time the music they present tries so hard to be the most extreme thing or the most obscene one that the final result might as well be something of the most laughable music ever. And this “band” proves it again. While it is very well produced, and has a deep and full guitar sound, nothing saves this from being a mosh around predictable Death Metal orientated band, with some of the most disturbing “vocals” (which sounds like gargling while trying to talk, and resembles at times to the ones in INQUISITION while other times they are just senseless low grunts). If one takes this in a humorous way and for fun only, then it is OK, just that the music sounds way too much generic. If one takes this in a serious way, there you go finding ways to think Metal can be retarded. The real name of the band means ‘Vaginal Penetration Of An Amelus With A Musty Carrot’ and you can also figure out what the lyrics are all about with the name if the cover art hasn’t give you a clue. Most of the songs in this MCD have some quite hilarious intros, so if you approach this as fun Metal, you will be fine. At 22 minutes (including some “live” songs!) this MCD from this Austrian band might as well be too long for most serious Metalheads. And when the disco parts in the intro of a few songs are way more interesting (to say it in a way…) than the Metal ones, you know something is wrong… www.facebook.com/pages/VxPxOxAxAxWxAxMxC/134742369896814, www.kaotoxin.com