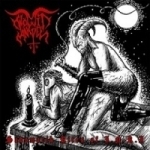 Jesus is dead. Satan rules now and forever. The whip is warm by the fresh blood and sodomy is near. The Finnish goat suckers and bearers of inverted crosses WÖMIT ANGEL are here too, throwing their 13-track debut full-length record shamelessly against our stupid faces, titled "Sodomatik Rites of I.N.R.I.". Music – as well as image-wise, WÖMIT ANGEL follow tightly a similar path that the Finnish ‘Nuclear Metal’ warriors IMPALED NAZARENE started on the band’s 1991 cult-ish demo "Taog Eht Fo Htao Eht". WÖMIT ANGEL sound also anarchistic, punky hysteric and Satanic the same way as the IMPNAZ camp did back in the day. However, what separates WÖMIT ANGEL’s big brothers from them, WÖMIT ANGEL sound a more teeny-weeny punky and rock-ish act than IMPNAZ – and I might even say these fellows have even sense for some true melodies, which doesn’t lower a bit WÖMIT ANGEL’s credibility in blaspheming everything holy on their way toward the final Harmageddon. Within these 40-something minutes there’s material on the disc, this obscene and blasphemous WÖMIT ANGEL horde manages to make a promise about an act to keep your eyes out for in the future. The first nasty rock has been thrown towards its target – now watch for more to come… These vile bastardz of WÖMIT ANGEL can be checked at: www.womitangel.blogspot.fi, label: www.inverse.fi