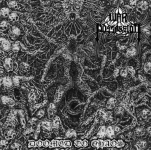 Greek Death Metal can sometimes be a foul, putrid kind of Metal… the kind that oozes like a puss-filled blister. And WAR POSSESSION fits the description easily. And is it any wonder with Haris, the guitarist of EMBRACE OF THORNS grinding his way throughout WAR POSSESSION’s first full-length? Their doom-filled Death Metal is a disease that festers and grows, and permeates the atmosphere surrounding them. "Doomed To Chaos" begins with ‘March Into Hell (Beyond The Chaos Gate)’, an epic intro with chants, keyboards and marching drums. ‘Operation Neptune’ sludges through deep grime with churning guitars, steady drumming (George C) and echoing death growls from vocalist Vaggelis. Bill’s basslines emit an underlying rhythm throughout. ‘God Of A Wicked Mind’ is definitely an old school embodiment of Death Metal. The fourth track ‘Verdun Hell’ reminds me a little of rising Metallers ENTRAILS, with its eerie riffs and fog-filled atmosphere, before collapsing and convulsing into a high-velocity bludgeoning. ‘Doomed To Chaos’, with its pounding drums and doomy pace settles in nicely, indicating the band can change it up while still maintaining a consistent sound. ‘War Is The Father And King Of All’ is a furious beast of a song with a title that defines it with no further description needed. Slowing down tremendously, ‘Slapton Sands Tragedy’ picks up speed over two minutes in when the vocals appear, only to slow down again until the end of the track. The final three tracks, ‘The Sword Of Stalingrad’, ‘Haunted By Carnage’ and ‘Mass For The Dead’ creep along with more doom, but wrap the album up nicely. There are definite similarities to EMBRACE OF THORNS in the riffs and overall atmosphere, which isn’t a bad thing. WAR POSSESSION should make any Death Metal fan content on this first album. Here’s hoping more is to come from these boys in the future. For more information, check out www.facebook.com/war-possession-416122555097944, www.memento-mori.es