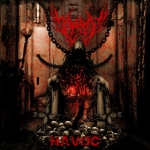 WARBELL is a melodic Death Metal band from Jelenia Góra in Poland and was founded back in 2008. In autumn 2009 they released their first demo titled “Battle Of Unnumbered Tears”. Shortly after this release the band was put on hold and started activities again in 2013. Their demo “Battle Of Unnumbered Tears” was re-recorded then and received many positive reviews after its re-release in cassette format. Soon after this, the band started to work again on new material and got together fifteen songs for their first full-length album “Havoc” which gets released now via Goressimo Records. The opener ‘The New Beginning’ is a modern melodic Death Metal track with all trademarks of this genre and some slight influences of Metalcore. Personally I think, it is better to leave the Metalcore influences behind, as this makes the music quite monotonous. But in the middle the track grows and is a real strong opener with fine melodies and a high songwriting quality. Their music seems to be heavily influenced by DARK TRANQUILLITY especially during their “Fiction” era but also ARCH ENEMY and some older IN FLAMES appear here and there. The remaining eleven tracks are all pure melodic Death Metal with really fine melodies and nice guitar solos. The drumming is fine and precise and the genre typical vocals between screams and grunts are completed by some nice female vocals and some carefully used keyboards here and there, similar to DARK TRANQUILLITY. Even though the style is known, the band manages to create their own little unique interpretation of this and due to proper songwriting, the songs have a high brand recognition and sound quite fresh and modern. The production is clear and quite powerful and as this nice output also has a fine cover artwork, it is worth to get a physical copy of this CD, which is limited to 500 pieces. Recommended tracks are ‘The New Beginning’ and ‘Through The City Of Darkness’ but the remaining tracks have a similar quality. Fans of this genre can check the band out at following locations: www.warbell.pl, www.facebook.com/warbellband, www.goressimorecords.com