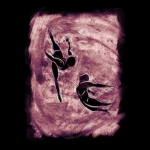 In the last, I’d say, 5 years I must have reviewed many more Black Metal than I have ever had in all my years in the underground. Now I am not the biggest Black Metal fan, but in saying that, when Black Metal is done and played the right way it can be a deadly combination of music. With that being said most of the bands of today are playing a generic style of Black Metal with just playing a million miles an hour and then having some guy scream / moan into the mic like he is out in the woods at 3am. This to me is just another generic Black Metal band with mega blazing fast pic riffing parts, with screaming vocals and long songs. They also have slower doomy parts, which to me were the best thing on this. The fast parts just sounded like any other Black Metal band I have reviewed over the last 3 years, but when they slowed it down it sounded really cool and the songs just had a killer vibe and flow. The songs when they were in the slower parts had just a ton of feeling too and I was really digging it. The production, I will say, is awesome and everything as far as the instruments go sounds great, but the music, it has its up and down moments. In closing there are far worse bands out there than this one and hopefully we will see an improvement on there next release. Info: www.facebook.com/lasterspraak, www.dunkelheit-produktionen.de