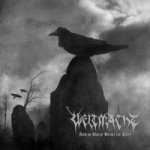 WELTMACHT
And To Every Beast Its Prey
(No Colours Records)
37:22min

Although the band’s name might suggest a relation to NS-ideology, WELTMACHT are definitely not a bunch of Black Metal Nazis, at least as far as I know, because I can’t read minds, right? They obviously took their Nietzsche lessons, but do not consist of kids, that try their best to be provocative, but serious members of the Black Metal underground: Akhenaten of JUDAS ISCARIOT / SEEDS OF HATE / SARCOPHAGUS fame and the vocalist of KRIEG. Musically their second assault does not differ that much from JUDAS ISCARIOT, the same riffing, the same breaks, the same raw yet epic and triumphant feeling, the same rare and tolerable keyboards. Only the vocals are different, slightly distorted sometimes, but ok. Even the long song titles are comparable to JUDAS ISCARIOT and show Akhenaten’s dominant influence on “And To Every Beast Its Prey”, but that is not negative in any respect, his lyrical work is extraordinary and even the song titles sound like grim mini-poems, e.g. ‘Where Fog Milled In Miles Of Winter’, I love stuff like that. WELTMACHT radiate sinister, superior and hateful emotions that should capture KRIEG and JUDAS ISCARIOT fans alike and underlines once again with vehemence that the best northern Black Metal does not come from Scandinavia anymore! Especially the shorter songs on “And To Every Beast Its Prey”, e.g. ‘Burning Red In The Clouds’ or ‘Chained Beasts Are Strewn’ are excellent and do not bore after a while like the rather monotonous first two songs. If you can live with this small white spot on WELTMACHT’s blackened vest, be sure to get this album, it is a really solid and interesting raw Black Metal release, crowned by an excellent b/w cover photo. The album does not inject anything new into the pestilent veins of Black Metal, but continues tradition with skill and routine. Try to get the LP version, because it features a bonus song. Surf to www.no-colours-records.de to order “And To Every Beast Its Prey” and obtain more information on WELTMACHT.