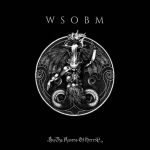 WHITE SNAKE OF BLACKENED MAZE
By The Rivers Of Heresy
(Petrichor)
44:11min

WHITE SNAKE OF BLACKENED MAZE is the moniker of a band or project from Belgium that keeps their identity or identities pretty secret. Not much information can be gathered about this band. But it is pretty safe to say that “By The Rivers Of Heresy” is their first output, that was released in digital form last year as well as on vinyl in a very limited edition. And now Petrichor, a sub-label of Hammerheart, took care of WHITE SNAKE OF BLACKENED MAZE and released the album again for all to hear. With this few information gathered: let the music do the talking? Yes, it does. And it speaks a more than interesting language. WHITE SNAKE OF BLACKENED MAZE are one of those rare bands that have found a unique style. Based in Black Metal, the Belgians play with some avantgardistic influences and ideas and present a dark and very diversified album that can hardly be compared to others. Sometimes I felt reminded of later, more experimental SATYRICON, in other moments PRIMORDIAL came to mind and some parts even have atmospheres and moods similar to acts like MISOTHEIST or SALIGIA. Add some more quiet piano led breaks, kind of growling Andrew Eldritch vocals and lead guitars in classic Metal style to get a vague idea of how WHITE SNAKE OF BLACKENED MAZE sound. Yet be prepared for surprises like the balladesque ‘Smash The Low’ that has a lot of Gothic Metal influences and a huge epic potential. Or ‘Shadow March’ that is basically a Speed Metal song in a Black Metal cloak. And all this leads to an epic finale that is highlighted by the dark maelstrom ‘The Preacher Of Nihil’ that drags the listener into the dark chasms of madness. So, if you are ready for a special dark musical journey, WHITE SNAKE OF BLACKENED MAZE might the perfect choice. Find out more about them at www.facebook.com/wsobm or visit the site of Petrichor: www.ochtenddauw.com