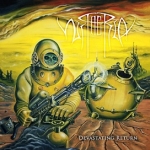 Finnish Thrashers WITHERIA have existed since 2000 (2000-2001 under the FALLOUT moniker though), slowly building up the band’s profile as a noteworthy and potential Finnish Metal act that could well become even something bigger one day if just a couple of stars in the nightsky turned a bit more favorable position for them. "Devastating Return" is clearly the band’s most solid album to this very date; the band’s sound is more refined and more mature than ever, and an increased amount of progressive elements cannot be left unnoticed either. WITHERIA perform the modern kind of, strongly progressive-tinged Thrash Metal, fusing some tiny elements from Death Metal into wholeness – and mainly vocal wise though. In fact, vocalist Tuberculosis somehow manages to sound like Chuck Schuldiner (R.I.P.) on DEATH’s last album "The Sound Of Perseverance", using his screeching and dry vocals nicely and even cleverly here and there. That, added with similar progressive elements that DEATH exploited a lot and so successfully on the band’s last album, make "Devastating Return" literally pretty much worth the album title; this is actually a devastating return from the WITHERIA camp back to some bright limelight again. ‘Some Wounds Will Not Heal’ is just one fine example of these guys’ true abilities to compose some infectious material that is meant to stick in your brain like a sticky gum in your hair. Another fine example of WITHERIA’s undisputed skills as professional songwriters comes in a form of song called ‘Thrown Down The Well’, in which WITHERIA show how to make an easy musical transition from pure straightforwardness and ass-kicking into some all horizons painting atmospheres, without sounding forced a bit but ending up sounding natural while doing so. Looking back, WITHERIA release a new album every 3rd year. The period 2011-2014 has been the most fruitful one for them yet regarding how big leaps they have taken as a tightly playing combo. Feel free to recommend this album and band for your close friends, relatives, enemies, or whatever really. WITHERIA have grown quite big balls on "Devastating Return", and that’s the fact. Got interested perhaps? Well, cool then because more ’bout these WITHERIA lads can always be found at: www.facebook.com/witheria, label: www.violentjourneyrecords.com