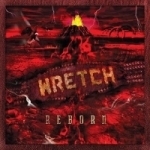 I hate to say this, but when it comes to new bands / releases in the traditional Metal genre, I mostly don’t care anymore these days. It simply bores me to death to hear all these bands that either have never really understood what Metal originally was all about or try so hard to follow the footsteps of what had already been done way better back in the 80s. Same with reunions. I still love and cherish all my classics, but only a handful of bands manage to impress me with their comeback releases. Cleveland’s WRETCH is a positive exception to the rule though. These guys used to be around in the 80s, recorded a couple of demos and even ended up being featured with a song on Auburn’s amazing “Heavy Artillery” compilation (‘Life’, with a different singer though). But they never got the chance to record a full length album… up till now. And it was worth the long wait, believe me, cause this album really smokes! Apart from ‘Reborn’, ‘I Am Storm’, ‘Nothing’ and the BREAKER cover ‘Touch Like Thunder’ the album only contains re-recorded old songs and all of them easily stood the test of time, sounding equally fresh as the new stuff. Well, ok – I’m not exactly a fan of the chorus in ‘Reborn’ and also prefer BREAKER’s original version of ‘Touch Like Thunder’, but that’s about it already… Musically WRETCH never sound nice and polished, they don’t offer one of these modern, sterile, digital productions, don’t give a shit about keyboards and their melodies aren’t of the wimpy type either. So, what do we have here then? Imagine a rough sounding vocalist in the David Wayne meets Paul Di’Anno vein (who can easily pull off the high Halford-type screams as well) and a band that celebrates a songwriting, reminiscent of the early METAL CHURCH power chords with traces of vintage MAIDEN (first album) and JUDAS PRIEST. Really heavy stuff, with lots of energy! The change of vocalist was definitely a good move in my opinion as Colin Watson’s angrier style fits the band a lot better. So, even those of you who usually avoid traditional Metal because of the mostly rather high pitched vocals or the predictable HELLOWEEN-ish writing style should give these guys a listen. Very impressive stuff in the typical top notch Auburn quality tradition! There’s gonna be an EP with some live material and a couple of tracks from the “Reborn” sessions (that didn’t make the album) early next year, including a different version of ‘Touch Like Thunder’ that features WRETCH’s singer Colin Watson together with BREAKER’s Jim Hamar, so watch out for that as well! For more details or ordering info check out the label’s website at www.auburnrecords.com.