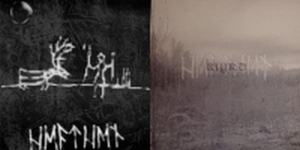 The mighty Suomi has proven to be one of the most innovative countries in the 90s when it comes to harder music. Most of the bands have nonetheless invented an own style but they were somehow outstanding in what they were doing or in their development. And I am still astonished how many good bands I discover from the land of the thousand lakes. My next discovery is the Finnish band WYRD. WYRD is the one-man-band from Nargath that some of you might know as he is involved in either AZAGHAL and HIN ONDE. He is completely played, recorded, mixed and mastered this CD at his own studio. The only(!) song entitled ‘Heathen’ developed from 1998 – 2001. And again I fail to give any hints how it sounds like. I have read about comparisons to KAMPFAR and ABYSSIC HATE but these totally fail, in its unorthodoxy I would perhaps compare WYRD to early DARKWOODS MY BETROTHED and NATTVINDEN’S GRÅT – especially as the clean vocals that appear from time to time are a matter of taste like they were with the aforementioned bands. By the overlenghty songstructure I somehow feel reminded of the very first BERGTHRON-album. The song is carried by accoustic guitars on the one hand and two very melodic keyboard-lines on the other hand while the guitars and the drumming are only in the background filling the emptiness that might be their thus to get a more massive sound. The lyrics tell the story of a land that has been plundered by Christians and the day of revenge. Nothing special really but what I nevertheless like about them is the more clichee-like lyrics actually on the one hand and the reference to Finish ancient gods on the other hand – at least I expect them to be Finnish as I never heard the names “Ukko”, “Tuoni” etc. before. Actually if he is so much into Finish mythology I wonder why he didn’t use the “th”-rune instead of the runes for “t” and “h” for the obvious well-done and stylish cover. To make it short: I personally can only recommend this album but be warned: I needed some listens to really get into the album while on the other hand from the first time on time floated away and I have never been bored. If you might have problems with uncommon clean vocals or rather long accoustic parts better do not check this album, but if you like to enjoy something new and unorthodox, I’d advise to get this. dragonthroneproductions.cjb.net