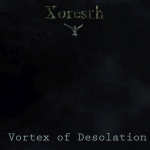 XORESTH is a one man Funeral Doom / Drone band from Turkey. Dorukcan Yıldız, the mastermind behind it, has already released a demo, 3 splits and their debut full length. "Vortex Of Desolation" is the band’s sophomore album and it follows the trail set by their previous outputs. I have always thought that Doom Metal and Drone have always been an acquired taste. Specially this kind of music, which relies solely in atmosphere and aural landscapes. "Vortex Of Desolation" is definitely a perfect title for the music showcased here. 3 songs, clocking at 34 minutes. So each song is in average 10 minutes of pure, sonic chaos. I have always been a fan of Doom and Funeral Doom Metal. And even though XORESTH fall somewhat in this subgenre, I think that the Drone influences overshadow everything and eventually, the songs sound a little too similar, although some of the melodies are really memorable. My fave track is the closer, ‘Nefes’, which has a lot of clean guitar arpeggios that instantly reminded me of THERGOTHON and FUNERAL. The production is good. There are a lot of things going on and keeping a clear mix is a monumental amount of work. Yet, the sound is cohesive and all the instruments become part of the unity, which unleashes a thunderous amount of heaviness on one side and haunting clear passages on the other. The vocals, which range from deep growls to desperate screams sustain the density of the instrumentation. Apart from drums, guitars and bass, the keyboards are a main element. The pads and piano melancholic melodies mixed with the thickness of the music, which is actually pretty hard to figure out in the first two songs. This is not music for your everyday listen. It is deep, dense and heavy, yet it has a lot of emotion. But if you are a fan of Drone, Doom and Funeral Doom Metal, go ahead an get it right away. You won’t be disappointed. Contact the band here: www.facebook.com/xoresth. And get the album from their label here: www.satanath.com/distro