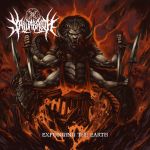 YALDABAOTH is an Italian power trio, formed in 2019 with members and ex – members from bands such as HUMAN, HERCESIS, UNBIRTH and BLASKHYRT. So these guys are not newcomers at all. Fast forward two years to “Expunging The Earth”, their debut EP released by Mexican premier label Iron, Blood and Death Corporation. I think that Italy has never had a lot of well known names when it comes down to Death Metal especifically. At least, not that I can remember right now other than SCHIZO or NECRODEATH (but I also think that these two bands were more of a frantic Thrash / Black Metal than Death Metal per se). But it seems that YALDABAOTH is a serious contender for this position, so to speak. These 5 songs show not only a lot of professionalism regarding production, but they also have really good structuring. They had two years to develop these 5 songs (and maybe more) and it shows. It is really interesting how they have managed to put them together and make them work flawlessly. One word comes to mind after the first spin: intense. Almost 19 minutes of sheer and brutal Death Metal that keeps the listener absolutely strapped to his / her seat. And although the songs vary in tempos and dynamics, the main thing for YALDABAOTH is speed and accuracy. Marcello Olivi’s drumwork is absolutely amazing. He is one mean drumming machine, delivering not only tight grooves but also lighting fast fills and blast beats. He is followed closely by Michele Sassano’s pounding bass lines. Michele also takes care of the extremely good rhythm guitars alternating both, tremolo and palm muted riffing. Last, but not least, there’s Emanuele Freddo providing the razor sharp leads, which just add another level of extremity to “Expunging The Earth”. Oh, and Michele’s vocals, a mid-pitch grunt / yell, fit in perfectly with the overall sound of the band. The clean and balanced mix, which I think is exactly what these songs require, never takes away from the raw and pummeling sound of YALDABAOTH. This is not old school stuff. “Expunging The Earth” is a highly technical and intense release of early XXI Century Death Metal. It sounds and feels the way it should be: extreme and brutal. I am already looking forward to new material from these guys. You can contact the band here: hellcrusader88@hotmail.com and get their EP from their label here: www.facebook.com/ibdc666