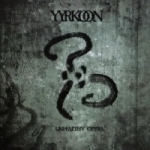 It seems YYRKOON has reviewed their choices since the issue of their previous effort (“Occult Medicine”) since “Unhealthy Opera” sounds more focused and a little less clinical. A sort of Lovecraftian concept unifies the thirteen songs on offer here, and that maybe helped the band to come up with a more cohesive album than it was the case before. The production was handled in Denmark, more precisely at the Hansen studio, no wonder then the album sounds very much like a Scandinavian melodic Death / Thrash affair so much in favour today. Like I wrote in my “Occult Medicine” review, it is difficult to me to emotionally connect with this kind of release, even if I admit the amount of work put in “Unhealthy Opera” is obviously phenomenal. The musicians prove themselves extremely talented; a lot of effort was directed towards refined song writing, trying to find new structures and ideas. Still the final result sounds very synthetic and devoid of a real feeling to my ears, but I am surely not the right person to judge about that. I prefer old fashioned music (this betrays my age I suppose), with a vintage analogic production. What I appreciate the most on this album is the vocal delivery, always kept deep and guttural but with a certain clarity remaining, only on the track 13 (a bonus song only featured on the limited edition of the disc) clear voices appear, not a good idea if you ask me. To sum up the overall atmosphere of this disc, think of a more melodic version of ZYKLON, and I guess you will get a fair idea of the content of “Unhealthy Opera”. I am pretty sure this album could find its audience pretty easily, given its qualities. It is simply not for me. www.yyrkoon.net.