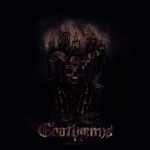 It is pure chance that I found out about the band ZÜGELLOS from Wikon in Switzerland. I downloaded their first and up to now only album "Goathymns" for free from their bandcamp site and was absolutely blasted by these nine short songs. ZÜGELLOS (means "rampant" or better "free of reins") is a one-man band, but that doesn’t mean the music to be wishy washy keyboard-diseased junk. It just means that Mischa Horn, the guy in charge, did (nearly) everything on his own. And he did it damn fine. The music always walks on the edge between Crustcore and Black Metal, never really deciding for one style and thus giving a perfect definition for the term "Blackened Crust". Simple, sometimes even rudimentary music, reduced to the minimum that is needed to create a special, gloomy and nightmarish atmosphere. Due to the way of drumming, DARKTHRONE often comes to mind, since the D-Beat oriented simple grooves that are the driving force of the songs remind of Fenriz’ drumming. This is extremely striking in the opener ‘Goathymn II’ or in the programmatic ‘Chaos’. The guitars often use some of the typical tremolo harmonies that can be found in some Crust songs, to be seen perfectly in the great ‘Perdition’, along with Black Metal styled riffing in a great balance. As the topping we have Mischa’s ability to write songs that come to the point and to interpret them in a both evil and pissed way. For the real evil vocals, he got help on the song ‘Empty Eyes’ from Puke of HOLOCRUST, who seems to be his brother in spirit. What I like most about "Goathymns" is the variability of driving, a little chaotic songs like ‘Goatwar’ on the one hand and slower, even doomy songs like the instrumental ‘…Of Decay’ or ‘Goathymn’ on the other hand. And another important Brownie point is the very natural, un-clean production of the songs that keeps the songs alive and makes the rawness nearly catchable. Really, this is one of my absolute faves this year, so don’t disappoint me and give Mischa’s work a chance, it’s for free! Get "Goathymns" at: http://zuegellos.bandcamp.com and give them a like on: www.facebook.com/pages/zügellos/195004570594908