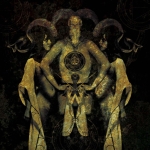 Well, I am not really a lazy guy, it is more that some things in life are more attractive than others. The scientific term is procrastionation, which is defined as "the practice of carrying out less urgent tasks in preference to more urgent ones, or doing more pleasurable things in place of less pleasurable ones, and thus putting off impending tasks to a later time, sometimes to the "last minute" before the deadline." So says wikipedia and I guess most people know this effect, some more, some less. ZÜGELLOS impressed me with their debut "Goat Hymns" and thus the following EP "Shellshokk" made its way to the top of my playlist (by the way, anyone reading the playlists of the VOICES contributers?). My intention was to write a review for that EP, but before I finished (in fact before I even started writing) the Swiss one-man project already announced the release of the second album. It was released at the end of 2014 track by track on the bands bandcamp site and I have to hurry up writing a review for "Horror Vacui" because the drums and guitars for album number three are already recorded! The first album left a lasting impression due top the mixture of Black Metal and Crustcore, which is not very common. On "Horror Vacui" you will find less D-Beat orientated song-structures. To me it seems there are more raw Black Metal influences like early GORGOROTH and suchlike. And sometimes, especially during the songs also featured on th EP, the guitar-riffs are a class of its own. Gloomy, melodic but at the same time harsh and brutal. But that are just slight changes, the fundament of "Blackened Crust" has not changed. Guest vocals are done by Puke from HOLOCRUST as well as O. from PORTA NIGRA / MEMBARIS and CHAOS INVOCATION. Sadly this release is, like the predecessors, only available in digital format. The great artwork (conjured by Maurice de Jong aka Mories) is yearning for a vinyl release. http://zuegellos.bandcamp.com