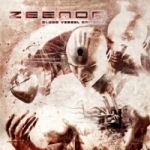 From the mainly black lands of Norway comes ZEENON: three long-haired women on vocals, bass and guitar together with one short-haired man on drums bring you technical, tight and fast Death Metal with a clean but heavy production for again long-haired Death Metal lunatics. Doesn’t that sound dramatic!? Unfortunately ZEENON’s music is not as dramatic as my opening sentence. On “Blood Vessel Criteria” you get eight modern Death Metal tracks with a slight Thrash Metal note. All songs are mainly up-tempo, with grind-parts, mosh-parts and some technical in-between-parts. Bands like SINISTER, DEICIDE, DYING FETUS (without the Hardcore-jump-your-trousers-under-your-knees-parts) and especially ALTAR (soundwise) come to mind when ZEENON talk to me through the CD-Player (the band names MORBID ANGEL, SLAYER, MESHUGGAH, OPETH and CANNIBAL CORPSE as influences but I can’t hear any of these on “Blood Vessel Criteria”, especially not OPETH!). The songwriting is the weakest aspekt on the CD, the songs sometimes just sound pseudo-complex and give meaningless riffs too much room. That is a thing the band should work on to give their songs more maturity. Surprisingly ZEENON is around for quite some time now: already founded in 1995 this is their first full-length release after six demo CDs or EPs. Yet I must admit that they did not catch my attention before this release. And now I know why: it is quite hard to get into a band that simply lacks its own identity, its own face to get my reviewing hooks under, rip it off and look what lies behind. Nothing really bad to say about this release, except the songwriting: everything is well played, most of the riffs are ok, vocals are fine, sound is good, balanced mixture of blasting Death Metal parts and crushing mid-tempo Thrash parts, modern-standard artwork and some interesting lyrics (somehow in the CARCASS vein but without the words nobody understands…). But I would never buy a CD like this, it simply doesn’t grip me in any way… Anyway, if you are still interested check out the bands well done website to listen to a track from “Blood Vessel Criteria”. www.zeenon.com, www.retributerecords.com.