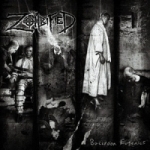 Ireland’s ZOMBIFIED strike out with another EP after last year’s "Outbreak", which was quite impressive dose of US influenced brutal Death Metal. Not much changes here, the band is developing their brand of brutality futher on. You’ve got an intro and five furious tracks, with impressive technical skills showed all over the place, but they don’t overbear on that, it is still the bulldozing brutality that counts. I detect some MORBID ANGEL influences from the Steve Tucker era and also fans of SUFFOCATION, CANNIBAL CORPSE or DEEDS OF FLESH will find where to sink their bloody Metal teeth in. Still with a name like ZOMBIFIED I have expected more gory / zombie themes, but these guys prefer darker, serial killing related subjects creating this unsettling atmosphere. This is definitely recommended if you crave for a quick fix of good old fashioned brutality done with great dedication and great production retaining a good deal of rawness, although it doesn’t stand out as something truly memorable in the songwriting department. My two fave tracks are ‘Limb After Limb’ and ‘Mured Serpent’, just insane, brutal Death Metal with insane tempo changes, solos, deep growling vocals, going from suffocatinly slow to morbidly fast, amazing shit! Contact: www.grindscene.co.uk, www.zombifieduk.com