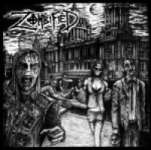 ZOMBIFIED is a young band from Northern Ireland coming at you with their debut EP "Outbreak". Despite being formed only in late 2009 ZOMBIFIED display damn tight and solid musicianship. An intro and 4 tracks of brutal grinding Death Metal is what you get here, heavily influenced by US Death Metal bands like CANNIBAL CORPSE, SUFFOCATION and GOREAPHOBIA, but less technical. They also remind me of Welsh band DESECRATION quite much, especially their "Gore And Perversion" album, very similar in sound and style, not a blatant copy, but it should give you a good idea of ZOMBIFIED’s influences. My fave track is ‘Zombie Fodder’ with a very REPULSION – like riff and dark atmosphere. Don’t expect much originality here, but a very solid and brutal EP clocking in at 11 minutes, which is also a big plus in my book, because it doesn’t get boring. Well worth checking out and I’ll definitely be waiting for their full length album. Contact: www.grindscene.co.uk, www.zombifieduk.com