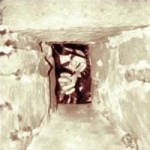 Imagine a person "A". When this person starts a band at the beginning of the 90s, for being able to distinguish between the bands he’s part of, we call this band "M". This band plays Death Metal à la DEICIDE. When the big Death Metal-boom however collapses, he realizes that Black Metal will be the next big thing, this band turns into a Black Metal-band with the second demo, offering there a crude mixture of music and lyrics with Satan and Wotan walking hand in hand through misty forests. With a sudden a certain British Black Metal-band turns up, selling quite a lot of records with a very stylish vampiric image, so the debut album of the band "M" suddenly turns out to be of every vampiric imagery. Despite the music this album however sells ironically quite well for a German Black Metal-album. To cut a long story short: after raping a German saga with the second album and playing in costumes that would fit well to a circus-show, at the peak of Swedish Black Metal "A" thought it would be very clever to start a solo-project called "I", copying the style of DARK FUNERAL and the likes. Are we really astonished that at a time when great bands like CLANDESTINE BLAZE or KATHARSIS celebrate the renaissance of raw Black Metal (not to forget that hose bands started when no one really cared about the true Norwegian way of Black Metal?) this person starts a new band – in this case called ZORN – which plays raw Black Metal and citing DARKTHRONE, GORGOROTH or BEHERIT (I still couldn’t find any trace of this band anyway) as influences? Well, if I see the development of the last ten years or read interviews once again that "A" did, I personally have my doubts that this person is really the leading a-wolf he tries to pretend he is when talking to him. However, bearing in mind his previous efforts, I must admit that ZORN remains the best of all he has done until now. As I honestly don’t need invention or anything as long as Black Metal has a soul, this CD is partly quite reasonable. Some passages (e.g. in the songs ‘Endsieg’ or ‘Kristallnacht’) are quite good, while others are utterly dull and in the end, there are many better choices (the aforementioned bands but also CRAFT etc.) than ZORN especially as long as we search for something like integrity within Black Metal. Not a bad album, but aren’t there too many "not bad" albums today? http://www.zorn.darkmetal.net.