The following interview with artist Vince Locke is already pretty dated (it was done way back in 2004), but since it has never been published in English before and most of its content is still pretty interesting after all those years, we decided to (re)publish it here. Enjoy!


Hi Vince, most of the people who will read this interview know you from your superb artworks you did for CANNIBAL CORPSE. But you also did great jobs with the Deadworld comics, the "Sandman" stuff and other paintings and drawings. Could you please first introduce yourself a little to our dear readers? Where and when have you been born, where did you grow up, where do you live nowadays, do you have a family…?

"I was born in Texas, grew up and currently live in Michigan with my wife Khrysta and 3-year-old son."

When did you begin with your drawings and paintings? Was there soon a fascination for the Horror and Splatter stuff?
"I have always been drawing. As a kid I would copy what my dad would draw, usually dragons and monsters. Then I would try and come up with my own. I was always interested in monsters, not so much with the gore. I loved the old universal monster movies, Godzilla movies, Ray Harryhausan movies, etc." 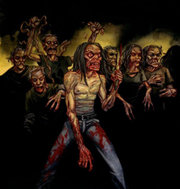 Did you study painting or graphical design? Or were you teaching it yourself?
"I started taking art lessons when I was 15. That’s about when I started getting serious about art. I loved to draw and paint but I wanted to get better. I studied art in college for two years and then quit to draw comics."

I think it’s very hard to get enough money with selling not very well-known art. Can you nowadays pay your bills with the money you get from your artworks? Or do you have to work in a “normal” job? What kind of jobs have paid the bills for you in the past?
"The only other job I’ve had was in college. I was a gopher for the art department. I did odd jobs, answered phones, ran errands, etc. for the professors. I’ve been lucky enough to be able to support myself with my art. I’m far from rich, but I’ve been avoiding real work for years!"

Before you did the CANNIBAL CORPSE artworks you made a bunch of Deadworld comics. This is a comic series where Zombies overtook the world ("King Zombie" rules!!!) and some humans try to survive this obscure and deadly world. Were you the founder of the storyline or did you just draw the first issues and some covers?
"In the beginning I just designed the characters and did the art. Later on I did more writing."

After you had left the Deadworld staff it was getting worse and worse… Why did you leave them? Bored of the Zombie theme?
"I left because I was getting bored with it. I had done the same characters for a couple years and a couple hundred pages. I started to have more fun doing short stories and covers." 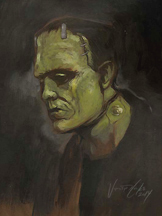 Am I right that Chris Barnes (CANNIBAL CORPSE, nowadays SIX FEET UNDER) contacted you for the first cover artwork because he was a fan of your Deadworld stuff? Tell us more about this first contact.
"Chris Barnes liked Deadworld and tracked me down. I don’t know how he did it. He just called me up one day and told me about the band and asked if I could do a cover."

You’ve made a lot of very cool artworks (I have two on my skin) for CANNIBAL CORPSE. My favourites are the first three ("Eaten Back To Life", "Butchered At Birth" and "Tomb Of The Mutilated"). Did you have clear instructions for the CANNIBAL CORPSE artworks or have they just told you the album titles? What are your favourite CANNIBAL CORPSE artworks?
"When Chris Barnes was in the band he had definite ideas of what he wanted on the cover. He would tell me his ideas and then I would go from there. I usually made changes, but they started from his ideas. Lately, I’m given an album title and some song titles. Then I work up ideas from that. I show a couple to the band and they pick one and give me input on changes they want. I think my favorite is the cover for the box set." 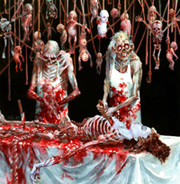 What sizes do the CANNIBAL CORPSE artworks have? In what techniques did you paint / draw them? Do you have favourite paint / colours to work with (like oil, gouache, watercolours etc.)?
"The smallest painting was for "Worm Infested" at 8” square. I think the largest was "Gore Obsessed" at 18.5” square. They are all done in watercolour. On some of them I experimented with oil glazes. I’m most comfortable working in watercolour with some detailing in gouache and colored pencil. Lately I’ve been doing some oil paintings for fun."

Do you know in which living-room the CANNIBAL CORPSE artworks are hanging now? One of the band members living room or did some others buy the originals?
"The band members haven’t asked for any of them. I’ve sold a few of the covers to fans in Texas and Germany."

After all these artworks you did for CANNIBAL CORPSE you are something like the sixth band member. But I’ve heard, that you never met the guys or visited a live-gig of them. Aren’t you interested in meeting these nice guys? Or do you just hate to go to a place where a bunch of Death Metal fans are fooling around?
"I do want to meet them! It’s just been bad luck. Either I’m behind on deadlines and can’t take the time off, or I was sick or previous commitments I couldn’t change. Most of the time I just don’t know when they are in town." (as you can see on a more recent picture on the right here, this has changed by now – Frank)

What music do you listen to? Can you get inspiration from music? Where do you get your inspiration? From older classical artists like Hieronymus Bosch or “newer” ones like Egon Schiele? Or any other inspirations like “life” or movies… What artists do you prefer?
"I listen to music while I work to set a mood, but I don’t really get ideas from music. I like a wide variety of music…JETHRO TULL, PINK FLOYD, THE DOORS, TORI AMOS, CONCRETE BLONDE, NINE INCH NAILS. My current favorites are the WHITE STRIPES and RASPUTINA. I get inspiration form all kinds of artist. Egon Shiele is a big influence. I also like Ivan Albright, Odd Nerdrum, Michael Kaluta, Jon J. Muth and Kent Williams. There are too many to name!"

Tell us more about the work you did besides CANNIBAL CORPSE and Deadworld. What was your first paid work? Are there any works of which you are very proud of ? I guess one of the most well-known things you did was "Sandman", right?

"Deadworld was my first paid work. "Sandman" is definitely the most well known project I’ve worked on. It was a lot of fun, and Jill Thompson and Neil Gaiman were great to work with. Some of the best comic work I’ve done is with Michael Zulli. I inked his pencils for "Witchcraft: Le Teurrer" and I think that is the best I’ve ever done. Too bad nobody read it! Another project I liked was "A History Of Violence". I got to work with John Wagner who created "Judge Dredd". I loved the "Judge Dredd" books."

You are an artist with the luck to earn some money from the work. Do you have any other things / hobbies in your life, like fishing, collecting stamps, shooting guns or doing Karaoke at your local pub?
"I like to watch old movies or play video games to relax. But if I’m not working I’m usually playing with my son who at the moment is obsessed with Hot Wheels and trains."

I’ve never seen a photo from you (even on your homepage there isn’t one). I guess, there is no private information about you in the World Wide Web, you don’t go to CANNIBAL CORPSE shows… Everything we can see from you is your art. It almost seems like that you are a phantom… Do you want to secure your privacy or do you just want to create an obscure identity with that “non-information”?

"I’m just a shy person and hate to have my picture taken. Besides, my art is much more interesting than I am." (in the meantime several photos of Vince have appeared, so you’ll find some included in this interview – Frank)

There are many artists who made many artworks for different bands like Dan Seagrave, Andreas Marshall, Chris Moyen and so on… Do you know them? What is the reason that you’ve almost exclusively worked for CANNIBAL CORPSE until now? I only know that you’ve made an artwork for TESTAMENT and for a crappy underground band called RADEMASSAKER…
"Very few people have asked! And it’s hard for a small band to pay me what I need to get paid, except for RADEMASSAKER!"

Why the hell are you selling mugs with little elps on it? Do they sell good or what??? What other things you have to style / sell to get some money?
"I painted the elf just to do something different, I put it on the Café press site to see how that stuff turned out. The café press stuff is good, I just haven’t had time to put more stuff up yet. Hopefully I’ll have some more stuff for sale soon."

Please tell us about you latest works and your future plans.
"I’ll be drawing Deadworld again next year. I’m working on the illustrations for a children’s book to start shopping around to publishers. I am doing more non-commissioned art now so I hope to make prints of some of the new paintings."

I thank you very very much for answering my stupid questions, Vince! I wish you all the best for your life and great success with the awesome art you make!