COFFINS is without a doubt one of the finest examples of dirty rotten Death Metal these days and next to ANATOMIA probably the most promising act from Japan in this genre. If your musical faves includes Death / Doom Metal bands like WINTER, AUTOPSY, DIVINE EVE, ASPHYX, HELLHAMMER / CELTIC FROST and the likes, you definitely shouldn’t hesitate to check them out. In order to introduce them a bit more detailed, we hooked up with guitarist / vocalist Uchino who kindly answered a couple of our questions… Enjoy!


I want to start off with one question that I made myself the first time I heard COFFINS: how does a band coming from Japan has that sound? I mean, some of your country mates such as ERODED, MULTIPLEX, S.O.B, TRANSGRESSOR and NECROPHILE come to mind when I think of Japanese Death Metal and all of them have other obvious influences like Grindcore and Doom. But COFFINS has that Death Metal / Crust mix that, even though it’s heavy as hell, also has all that groove going on. Did the band just start writing songs like that or did it take you some time to evolve into that trademark sound?
"Although I’m writing most of the COFFINS songs, I don’t exactly remember how we ended up getting this Death Metal / Crust mix. But I think it’s easy for the listeners to feel it. There’s a big big influence from HELLHAMMER / CELTIC FROST and WINTER, and I’m always studying their riffs, beats and musical compositions when I write music. As their sound contains many Crust elements, it’s a factor making our crustical songs. But I myself love old Crustcore like DISCHARGE, ENT, ANTI CIMEX, CRUDE SS, MOB47 and many more."

The band has had some line-up changes in the past. Did all the members help develop COFFINS as a band or did the constant changes affect your sound?
"Of course member changes always evolve COFFINS. The current line-up is the best in the history of COFFINS. From the listeners of the old days, some may feel that our sound has changed. But I didn’t intend to change something in the compositions."

I checked your discography and besides your 3 full length albums, you have 15 splits, 2 EPs, 2 compilations and one single. How do you manage to put out so much material and so many records? Is the band constantly recording new material or have you all these songs and live recordings just laying around? And who decides which bands do you put out "splits" with?
"At that time, we received lots of split offers from various overseas labels and bands. The split releases approached from us are only a part. Of course we did recordings repeatedly for each release. In the process, we had released lots of singles. As we did not wanna lose those records, we released the single compilation album "Ancient Torture" the other day. COFFINS is my band, so I have a right of the final decision of this band. I judge all, always." 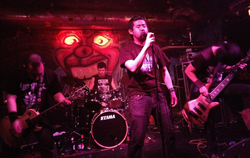 How do you come up with the songs? Do all members take part when composing music and lyrics or do you have one or two persons in charge of the COFFINS material?
"All COFFINS songs are written by me and Koreeda. The musical taste of me and him is fundamentally different. In order to employ it efficiently, we prepare a song completed by each individual, and do a rehearsal. And then we finally discuss it with all members and complete the song."

Do you handpick the artwork for every release or do you collaborate with artists you already have worked with?
"As my job is also an artist, I have a persistence in selection of artwork. At the moment, we are offering artwork to Chris Moyen for a full-album release. As for the compilation albums, singles and splits, we collaborated with various artists like Mark Riddick, Putrid and many more."

You have been active as a band for 12 years now. Have you had a good acceptance in your country? Has the Japanese scene changed for you in terms of recording, playing live and publicity? How about the International scene? Do you think COFFINS has transcended the Japanese borders?
"In recent years, the situation for us has improved. But there was no support in the country for us till then. Because actually it’s so difficult for a Japanese Death / Doom Metal band to be supported by the Japanese Metal fan. It’s stupid, but it’s true in Japan!! Anyway, we can say that we established the present status, thanks to all overseas Metal fans. Full respect guys!!" 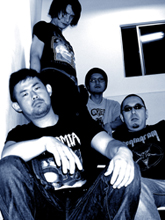 It seems nowadays, every 2 minutes a new band or album comes out, mostly trying to emulate the classic sound of the late 80s / early 90s or trying to do something new, such as mixing in all kinds of influences, ranging from Jazz up to atmospheric and even electronic music. So far, how have you kept your interest and excitement in Death Metal?
"Indeed I also know about the new Death Metal movement. But I’m continuing hearing only records of original old school bands anyhow. It seems that there is also labels with the same idea as me, and they have unearthed and released unreleased stuff (demo, live etc.) by old bands. I mainly spend money in order to get releases with old material. It may be the factor why my passion for Death Metal did not cool down, I guess."

In terms of developing your sound, which bands (or movies or books etc.) do you think have influenced your music and lyrics the most? All the members must have a fave record or book, I guess.
"I’m affected by old Thrash / Death / Doom Metal bands like HELLHAMMER / CELTICFROST, BATHORY, WINTER, AUTOPSY, BOLT THROWER, DEATH / MASSACRE and old school "Swedish" Death Metal like NIHILIST / ENTOMBED, CARNAGE, DISMEMBER, GRAVE, UNLEASHED etc. Koreeda is into old Hardcore / Crustcore / Power violence bands. Although it seems that Satoshi is generally detailed, but his musical taste is close to me and Koreeda. Ryo is still young, so he is not exactly into any old band, but is conversely more knowledgeable about new bands of new school / brutal Death Metal / Deathcore than us. Probably he still needs to study about old school bands." 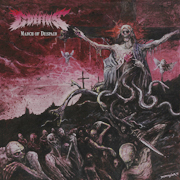 You have put out 3 albums in 16 years, 2005, 2006 and 2008. And each with a different label. Why didn’t you stay with one label for your full lengths? Were you satisfied with the labels and how they did promote COFFINS? How do you choose a label to work with in the first place? Since you are such a proficient band, can we expect a new album soon?
"Contracting with overseas major labels has lots of difficulties for Japanese Metal bands. So we did not do enough promotion to overseas major labels. As we have worked honestly in the underground, we’re looking for the label that supports us anyhow. And we released our first album through Razorback Records. We did not have a persistence in the label selection. As they offered us a deal first, we released our first album through Razorback. That’s about it. In the process we released 3 albums on various labels. I think that they did the maximum support for us. But as they are small independent labels, the distribution has a limit. So we made the album re-issues with Osmose Productions and Hammerheart Records. New album? Yep, at this time we are doing pre-production work. Soon the real recording for the album will start. Please wait!!"

Can you describe a COFFINS show? Which gigs have been the best so far, local or international? Do you have any upcoming plans for tours?
"After all, overseas shows are impressive. Especially the Maryland Death Fest in 2010 was awesome!! At that time the "COFFINS call" took place at the venue. It was the first experience for us. Also we could meet many friends, and could see the stage of other days slowly. We are planning a European tour next year again, and are adjusting the schedule for the plan now." 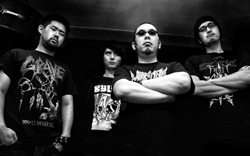 Do you have a favorite COFFINS album, release or song? Why?
"I love the second album "The Other Side Of Blasphemy" the most. Because it seems that Death Metal and Doom / Sludge have united better. I mean, it was a sound near my ideal. That album is a prototype of the current COFFINS sound."

Have you been following the Metal scene during the last decade? And how do you think it compares to the "good old days"? Are there new bands that have caught your attention?
"Time is very fast and an old man like me can’t grasp all any longer!! In the end, as always… I have followed only old bands. But of course I’m also checking out new bands, I often hear albums of GHOST, THE DEVIL’S BLOOD, URFAUST etc."

I can’t do anything but to thank you for all the time you put into answering these questions and I am looking forward for more COFFINS material. Is there anything else that you would like to say?
"Only Doom Death is real, thanks!!"