Former NIHILIST / ENTOMBED drummer Nicke Anderson has finally re-discovered his musical roots and returned to the scene with an impressive oldschool Death Metal act named DEATH BREATH! The band has already put out a 7" and a full length album "Stinking Up The Night" (see review section for more details), which really impressed me a lot. You’ll discover a lot of early MANTAS / DEATH, AUTOPSY and REPULSION influences (among others) in their writing, so that the band is highly recommended to all those of you who prefer Death Metal in its most purest form. Nicke was once again nice enough to answer all our questions, so read on to find out more about ’em… 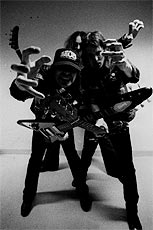 When exactly did you re-discover your interest in good old Death Metal? Did the CD re-release of the NIHILIST demos have anything to do with that maybe?
"Can’t give you an exact date. Putting together the Nihilist CD probably had a little influence on me as well as the Choosing Death book. I’ve been gradually coming towards this and I just think it was time for me to get back to work after several years on vacation from Metal which I guess I needed it after 10 years with Nihilist / Entombed."

Was it difficult in any way to find people that still shared your love for oldschool Death Metal? How did you actually start promoting your idea and how many people did you have to contact until you found Robert and Magnus?
"No, Robert and I started talking about Metal sometime early last year or so and we pretty much agreed on what we like and don’t like about Death Metal. When I told him I wanted to give a shot at recording something he said he was thinking along the same lines so we decided to do it together. More fun that way. I showed him some demos I had made and he played some stuff he had been working on. Later we met Magnus at a show and asked him to join."

Was DEATH BREATH your number one choice when it came to the band’s moniker or did you have any other options in the hat as well?
"We actually thought about Black Breath first but then I found out, to my surprise, that there was no other band called Death Breath. I’m still a bit puzzled about that actually." 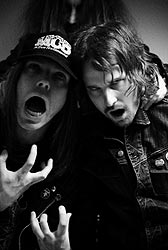 The logo design looks a bit POSSESSED-like… was that a coincidence or intentional?
"The Possessed logo is classic. I guess it’s similar though it’s the tail that gives it away."

I was also wondering if the band’s name was either based on an experience you’ve had when you were kissed by a dog, your extreme love for Tzatziki or if you simply adopted it from the old REPULSION track ‘Black Breath’ and modified it a bit in order not to be mistaken for a Black Metal band?
"You’re wrong on all accounts. Can’t think of many things more disgusting than really bad breath. Black Breath would’ve been a good name though. It’s just that I find Death Breath slightly better. People can mistake us for anything if they want, it really don’t matter."

Did you start writing your own material right away or did you jam on a lot of genre classics first in order to see whether you musically would get along or not?
"All these riffs started coming out of me and they still do. The same goes for Robert. So no, we didn’t have to jam to get going. It’s in our blood I suppose."

It’s pretty obvious that your vision of Death Metal pretty much differs from what gets released in that genre these days, so do you actually still listen to any of the newer bands or is that something you don’t care about at all?
"Yes, I’m hopelessly out of touch with what’s cool today. It seem to work in our favor though. If I hear anything I like I’ll listen to it. I like Cretin, Aura Noir, Serpent Obscene, Darkthrone and a few others but none of them are exactly new."

Give us your definition of Death Metal!
"Death Breath!"

How did you get REPULSION’s Scott Carlson on board to sing on 3 of your songs? Did you exchange tapes or did you get together in person for the recordings?
"I’ve known Scott for a while since we met sometime in the early ‘90’s when Entombed played in the States. We’ve kept in touch a little. We’ve hung out when The Hellacopters have played in LA. I think I asked him over a year ago if he’d be interested in doing something. When we started recording “Stinking…” we thought it’d be too expensive to get Scott on the album but technology actually works. So we ended up sending files back and forth." 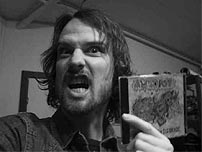 Considering the big influence that REPULSION had on you for quite some time already, it must’ve been a dream come true for you working with him, wasn’t it?
"Yeah, it’s an honor to have him on the record. Hopefully we can record more stuff together."

When and how did Jörgen (Sandström) and Fred (Estby) get into the picture? Was it planned from the beginning to work with different vocalists or did it just happen on the way?
"We talked about having different singers early on. I even tried but it sounded like shit. We asked Jörgen around the time of the recording – February. Fred did his infamous Tom Araya interpretation when we rounded things up in the studio."

By the way: who’s Markus Karlsson, who sang ‘Corpses Of Death’ on the 7"?
"He’s in a rock band called Republikans and he’s been in a band called The Turpentines and a Grindcore band called I Quit."

Was that 7" actually the first ever DEATH BREATH studio recording or did you do any demos prior to it? How did you hook up with Black Lodge for the release of it so quickly?
"We recorded the 2 tracks for the single after we did the album ‘cause we wanted to put out a single. Mainly because we like that format a lot. Like I said, me and Robert made rough demos on our own to show each other what we had. But the album was the first thing we properly recorded. I’ve known Carl and some of the guys at Black Lodge for years. They (House Of Kicks) distributed Earache back when Entombed released the first album. House Of Kicks / White Jazz also released the three first Hellacopters albums. When I told Carl about Death Breath he said he wanted to put it out. That’s before he heard a single note." 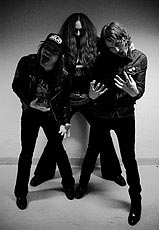 Was it a limited edition release or something? Why didn’t you re-record ‘Corpses Of Death’ and ‘Matricide’ for the album? Its rather short playing time would easily have allowed it…
"I believe it’s limited, yes. I like “short” albums. Anything over 45 minutes will bore me stiff."

Had you already signed a contract with Black Lodge for a full length at the time the 7" got released or did they use the 7" to test the interest first?
"See above."

When did Relapse Records get into the picture for the US release of the album and have there been any other companies interested as well?
"I asked Matt at Relapse if he’d be interested and he said yes. He did want to hear it first though. He dug it and decided to put it out. We didn’t really give any other companies time to get interested. I’m just glad it worked out the way it did."

Musically it pretty much comes down to 3 bands that seem to have the biggest influence on the songwriting on "Stinking Up The Night": MANTAS / DEATH, AUTOPSY and REPULSION… Would you agree to that? Was that a direction you had in mind when you wrote the songs?
"It’s hard for me to say since I don’t really think about other bands while writing. But yes, those bands are very important to us as far as we’re big fans and that they play what we consider to be Death Metal. I’d put Deathstrike / Master in there too. Not forgetting Venom and Celtic Frost and Possessed."

Do you prefer the early stuff of those bands or did you also enjoy the later (more technical) DEATH material or the AUTOPSY follow-up ABSCESS?
"Technical stuff is not for me. "Leprosy" was a good album with the worst snare drum sound ever. I lost interest after that so I haven’t heard much. I really like Abscess but to me they don’t sound that much like Autopsy." 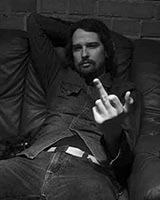 Why didn’t you record the album at Dustward Studio again (just like the 7") and went for Acetone Studio instead?
"After recording at Acetone we just wanted to try another studio to see what would happen sound wise."

You dedicated the album to your former NIHILIST bandmate Leif Cuzner, who died earlier this year… Have you still been in touch with him after he was out of NIHILIST? What was your reaction when you heard about his death?
"I was shocked when I got the news. We didn’t stay in touch but we met when we played in Canada with Entombed. May he rest in peace." 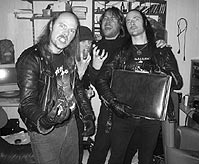 The sleeve design of your album, as well as the DEATH BREATH website, seems very much inspired by classic horror movies… Is that also something you try to incorporate into your lyrics?
"We write lyrics that seem to fit the music and so far they’ve been dealing with overwhelmingly bad breath, zombies, psychopaths, Armageddon, capital punishment, Satan, you name it. Anything Lovecraftian seem to work as well."

Just like everyone else these days, also DEATH BREATH have a myspace website as well (www.myspace.com/deathbreathdeathmetal)… What’s so special about myspace that no one seems to ignore them (except for us, maybe, hahaha…)?
"Robert’s the one responsible for that since I’m a bit behind on most things concerning computers and internet. It does however seem to be a very effective way to spread your music so I’m all for it. Saves a lot of postage money."

When it comes to your often very busy schedule with THE HELLACOPTERS, I was wondering if you also plan on doing DEATH BREATH live shows or even a tour in the not too distant future?
"We’re gonna play a show here in Stockholm on October 26. Scott’s coming over for it. If we’re kicking ass, which we should, we’ll see what we can come up with. I’m not a stranger to the idea of a tour though it would mean I’d have to undergo a pretty intense work out program in order to get fit."

Ok, Nicke, that’s about it for now. Feel free to end this interview in any way you like! Thanx and cheers.
"We’ll be recording some more stuff in October for an EP / 10”. We got shitloads of songs already so we’ll probably record another album early next year. We’ll definitely stick around for a while. Thanks for the interview."

For more info on the band, check out their extremely cool website at www.deathbreath.se or the already mentioned myspace domain www.myspace.com/deathbreathdeathmetal.