Sometimes you find out about bands by pure chance. To me, EXIT HUMANITY was such a band. There was a bandcamp link posted in a Death Metal group on facebook I am in, I checked it out and was blown away by the song ‘Plague Of The Undead’. It impressed me so much that I contacted Stefan, the guy who posted the link. Really, I wasn’t surprised that it was his own band. He sent me the complete EXIT HUMANITY demo, and “Undead Savior” was one real mind blowing killer of a demo! Since he’s a really nice guy, we kept in touch and now that “Undead Savior” was re-released on CD by Godeater Records, there was no chance for him but to answer some questions for our nice little webzine.

So, let’s start at the beginning and dwell in the past a little bit – what bands or albums made you a Death Metal lunatic?
“I like the old school stuff… Especially from Europe. BENEDICTION, GRAVE, PUNGENT STENCH, and DISMEMBER for example are among my all time favorites.”

Did you learn to play the guitar before you found out about Death Metal? Or did you start playing to create your own Metal of Death?
“Oh, I started to play the guitar a long time before I first heard of Death Metal. When I was six years old my parents allowed me to learn the acoustic guitar, and I’m very grateful for that. I think I was 20 when I started to play Metal on guitar.”

You already told me that you like some Punk and Crust stuff as well – what was first, Punk or Metal?
“Definitely Punk and I still love it today. There’s nothing like a nice bumpy raw Punk song. Cheers!”

Before you played with HARM, were there any other projects, known or unknown?
“I’ve played in some small projects. One was a Death Metal band called VIOLATION DOMAIN and the other one was a Grind’n’Roll band by the name of GORERILLA.”

In 2009, you founded HARM together with your brother on vocals and Solvernus and Splatter, but left in 2013. Did you still play on the album “Cadaver Christi”?
“Yep… I’ve written the songs and also played all the guitars in the studio.”

Why did you leave the band you co-founded? Musical differences?
“I did not leave the band in dispute. However, there already were a few small disagreements referring to the musical style. But I guess that’s normal in a band. I left the band because I’d left Berlin.”

After you departed from HARM, you decided to make a sabbatical year in Austria, but after only half a year, you were itching again to play some music. Please tell us more about the hour EXIT HUMANITY was born.
“Difficult to say. I used to play the guitar at home and started to record some riffs. I liked some of the new ideas and was suddenly in a song writing mood. Then one thing led to another and EXIT HUMANITY was born.” 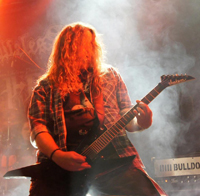 So, you wrote the music in Innsbruck and during the first trip home to Berlin, you entered a studio to record five songs on your own, together with drummer Jan. Did you already know him before?
“Sure… Jan is one of my best friends and a very good drummer. He has practised the songs at home with headphones on a spring pocket. The first time he played them on an actual drum set was then in the studio. In spite of that, it turned out really good I think.”

Was the whole recording session done within one weekend?
“It took us two weeks altogether. It wasn’t that easy, because Nico, the sound engineer, and Jan had to work until the afternoon, and I had only two weeks off for holidays.”

Some months later, are you still satisfied with “Undead Savoir”?
“Yes, very much! I still listen to it myself very often, and I have a lot of fun playing the songs. I think it’s good music to drink a lot of beers to.” 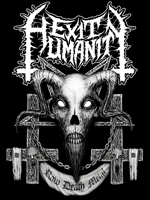 The first release of “Undead Savoir” was done on tape by Weedhunter. How did you get into contact with Hannes?
“I already knew Hannes for a while, we have worked a few times together for F.D.A. Records. I’ve sent him the songs so he could check them out. A short time later, he told me that he would like to make a tape version.”

Did you think about releasing the recordings on your own in the first place?
“If I hadn’t found a label that released the EP in time, then yes for sure. But it’s much easier if you have a label that supports you.”

Now “Undead Savior” will be re-released on CD by Godeater. Please, tell us a little more about the CD release!
“The CD version has a booklet with the printed lyrics. Of course you can also admire the brilliant cover art better now. The big advantage is of course that more people can listen to a CD than to a tape. I am really thankful to Daniel of Godeater that he re-released "Undead Savior". The quality is great and there is no need to hide behind the major labels.”

Are there plans for a vinyl version as well?
“A vinyl version would be cool… But at the moment there are no plans into that direction.”

To return to the music here – what are the lyrics all about? Horror, Death and the upcoming Zombie apocalypse?
“We picked a few different topics. War, murder and apocalypse are represented, but mainly we deal with the zombie theme. Typical Death Metal cliché … Ha Ha!”

Are there any bands in particular that influenced EXIT HUMANITY?
“Spontaneously I would say BENEDICTION and GRAVE. But we are not that narrow-minded. You can also hear some Thrash Metal and Hardcore influences.”

In the meantime, EXIT HUMANITY grew to a full band. So, tell us something about the other guys… Who are they, what did they do musically before (or besides) EXIT HUMANITY?
“Fabian is playing the bass. Just like Jan, he is one of my best friends. We have previously played together in HARM. Drummer Jan has previously played in THORNS OF COGNITION, which unfortunately disbanded. Besides he still plays within the Berlin Thrashers HIS MASTERS DESCENT.”

Have you found a rehearsal room yet?
“Yes… And it was hard to find. I’m really shocked about the rental prices here in Berlin. Don’t they know that musicians are poor people?”

In the meantime, do you have enough songs to play a full show? Or do you have to do cover tunes?
“We have two new songs for our live set. At the moment we don’t play any cover tunes.”

Did you already play your first show?
“No, not at this stage. First we want to practice a little bit together.”

Are there are already plans for some shows in the future?
“Our first confirmed gig will take place at the “Rhein In Blood” in Cologne (06.03.2015). But we’re looking for some gigs prior to that. I think from February 2015 on we will be ready to play live. If bands or organisers are interested, they are very welcome to contact us.”

Do you have any plans for a new demo, EP or even a full length album?
“Maybe we record a split next year. But if we won’t find another band, we might record a full length, but that will take a little longer.”

You’re a part of the Metal scene in Berlin that already brought us bands like NECROS CHRISTOS or DROWNED. Are you in contact with members of those bands, is there a real scene or is it more like anybody does their own things?

“Oh, you’re asking the wrong guy. I think it is a "real scene“, but I’m not really involved in it, because I’m not on the road so often. I know some guys from some Berlin bands, but I have more contact to bands from outside Berlin. In this sense I would like to greet my very special friends from LIFELESS and MASSIVE ASSAULT.”

So, finally, just name your top five albums of all time… : -)
“Not easy, but I try: BENEDICTION – "Transcend The Rubicon", ERIC CLAPTON – "Unplugged", PUNGENT STENCH – "For God Your Soul… For Me Your Flesh", PANTERA – "Cowboys From Hell", DISMEMBER – "Indecent And Obscene”."

All right, thank you for the interview! Do you have a final message to our readers?
“Drink beer, make love and support us ; -) Cheers!”

So, that’s a nice final message I guess, except for the beer, in my case! For more about the band, visit: exithumanity.bandcamp.com or www.facebook.com/pages/exit-humanity/187593994779314. If you want to get hold of the CD, visit: www.facebook.com/godeaterrec. Maybe there are some copies of the limited tape version still available, so tape maniacs should check: http://weed-hunter-records.blogspot.de

The band pics were taken by: www.facebook.com/annelinsefotografie