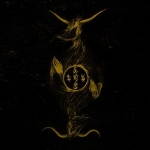 ÆVANGELIST
Enthrall To The Void Of Bliss
(20 Buck Spin)
56:24min

This is already the fourth album of the American ÆVANGELIST. "De Masticatione Mortuorum In Tumulis" (2012), "Omen Ex Simulacra" (2013) and "Writhes In The Murk" (2014) preceeded. As well as the EPs "Oracle Of Infinite Despair" (2011), "Nightmare Flesh Offering" (2013), "Abstract Catharsis" (2015). Also a split with ESOTERICA can be attributed to these two guys Matron Thorn and Ascaris. The first handling almost all instruments and the latter doing vocals besides saxophone, piano and others. As you can see a pretty impressive discography in such a short period of existence, being formed in 2010. Before ÆVANGELIST they’ve been active in bands as BENIGHTED IN SODOM, AUSTARAS, MIDWINTER STORM of CHAOS MOON and others. Mainly Black Metal bands, but for anyone unknown with these guys, they play a mix of Black and Death Metal with a paramount atmosphere of horror and chaos. This is attempted by throwing in melodies that go against the grain while being pretty weird or haunting. With this, a wall of sound is unleashed on anyone daring to listen to this, forming a universe with explores the edge of darkness. In the past (sounding strange, being only a few years ago) this hybrid cacophony resulted in excellent work on "Nightmare Flesh Offering" or "De Masticatione Mortuorum In Tumulis" which might interest fans of TEITANBLOD, PORTAL and others. Very brutal Death Metal with the possession of Black Metal as the motor with and (even more important) with interesting songwriting and riffs that were the fundament to carry tracks lasting close to ten minutes. On "Enthrall To The Void Of Bliss" the production isn’t significantly less heavy which is too bad but on the other hand give room for the traditional approach and put the band more in line with MITOCHONDRION, ABHORRENCE (Finland) or IGNIVOMOUS. This delivers some impressive tracks like ‘Gatekeeper’s Scroll’ or ‘Leviathan Stones’. Other tracks take a whole different approach like ‘Alchemy’ and yet others suffer too much of annoyingly out of tune, harp-like samples, like on ‘Arcanæ Manifestia’ or ‘Cloister Of The Temple Of Death’. The final track ‘Meditation Of Transcendental Evil’ starts off like a slumbering horror lullaby, but turns into Black / Death Metal with the intensity varying. This album captures some awesome sonic visions of the dark, but due to some factors it unfortunately also undeceives. Where your breakpoint is, can best be decided by checking first. Go to www.facebook.com/aevangelist.official or www.20buckspin.com for more info.