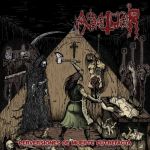 Back in the 90s, Panama used to have a steady Death / Thrash / Grind Metal scene. But in the first decade of the XXI century, most of the bands had disappeared or they were lying dormant for no apparent reason. Luckily in the last 6-7 years, the Panamanian scene has come back to life with a bunch of really good bands and ABATUAR is one of them. Formed back in 2013 by founder and sole member Cadaver (TUMBA, ex – EQUINOXIO, ex – ABERRANTE), the band has released two demo tapes: "Vejación De La Bestia" in 2014 and "Fosa Común" in 2015. Both demos showcased some really good, evil, dirty and heavy as fuck Death Metal. Now for 2017, their debut album "Perversiones De Muerte Putrefacta" has been released by the German label Dunkelheit Produktionen. The album continues the legacy and style of their demo tapes, but with much better production and 12 new songs. Don’t get me wrong, this is not your regular, overproduced and sterile Death Metal sound. The production is organic, raw and dirty. Right down to the mid 90s natural drums sound, thick guitar and bass tone and deep gurgling vocals. It draws influences from the classic South American Death Metal bands, but they also add their own twist to it. ABATUAR dwells into a much darker and evil atmosphere and fast paced songs that include Thrash, Death and also blast beat patterns. The riffs are thick and dense, with added tremolo parts and some SLAYER – esque tasty leads. Most of the songs are 2-3 minutes long, so the album is over way too fast. But right after it ends, you need to listen to it a second, a third or even a fourth time in a row. Jr Sucre and Tony Freire provide session guitars and bass respectively with Cadaver taking care of all drums and vocals. And their performance is great. Maybe sometimes the songs get a little muddy and uncontrolled when they hit full speed, but this doesn’t go against the great listening experience, which comes just around 30 minutes of total insanity and evil. In my humble opinion, this is how Death Metal is supposed to sound. ABATUAR’s music is honest, right in your face and has that totally awesome attitude, like if the album was recorded live in the same room. Oh, and I almost forgot, all the songs are written and sung in Spanish; an "exotic" touch, if that means something to you. So, go ahead and get this album now! This is not for the meek and it is definitively not for fans of that boring clinical sound. This is Death fucking Metal! Evil, Darkness and Death prevail! You can contact the band here: www.facebook.com/abatuar-755185244585530. And you can support the band getting their album at their label here: www.dunkelheit-produktionen.de