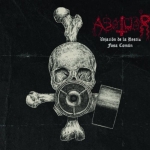 Digging through the Panamanian Metal scene. Something I haven’t done too much in my life. But ever since I got this compilation called “Vejación De La Bestia / Fosa Común”, I thought why not checking out what’s up musically-wise with that little country, which more or less keeps the two Americas together. A bottleneck in the middle of FARC guerrillas and drug lords in the east. Jungle, native tribes and Caribbean islands in the west. And everything what my ignorant mind imagines in between. Max Cavalera styled tribal tattooed clowns, beers in big glass bottles, cocaine for less then five dollars, colorful houses, steaks, relaxing marimba sounds, corn, Mara Salvatrucha and a lot of different ways to kill. Therefore it might be convenient that I found Grind and very abstract Death Metal as one of the earliest signs of extreme Metal in Panama. Bands like JEFE DE LA MORGUE, CHRIST SNACKS or HECATOMBE are worth checking when it comes to the evil roots of nowadays Black and Death assaults from that area. ABATUAR definitely stink of that old filthy Grind chaos from back in the days. Existing since three years, they have released two demos so far which both now appear on this compilation. Whereby the 2014 released, “Vejación De La Bestia”, is more Death Metal styled and the one year older “Fosa Común” appears more Grind influenced. In common is the Black and chaotic garb of which ABATUAR appears on both. Making this compilation are poison and hate spouting attack onto the stereotypes I had to struggle with. Instead of Cavalera Nu-Metal capoeira, I gladly sense a note of BLACK WITCHERY, PSEUDOGOD and IMPIETY. Current and only member “Cadaver” creates a nice haunting atmosphere through the varied use of samples and his various vocal works. Such as screaming and guttural chantings. Which he enriches with a few effects. Though it might sound like you have to deal with a lot of elements by listening to ABATUAR I can tell you it’s not too much or exaggerated. It’s pleasantly arranged and balanced. The sound keeps the stench of the underground but claims his place up front just through the very well songwriting and idealistic work. Therefore you should definitely check ABATUAR. With “Vejación De La Bestia / Fosa Común” you have a very entertaining piece of dark, aggressive, lawless and brutal Metal. Hopefully the next step will be a full length. Figure it out on: www.facebook.com/abatuar-755185244585530, www.dunkelheit-produktionen.de