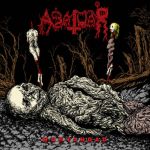 Cadaver (aka Jose Miguel Quintero) has been very active in Panama, his homeland, for some years now. Actually he is the drummer for CHRIST SNACKS and TUMBA and has also played for EQUINOXIO, ABERRANTE and other bands. Eventually, he wanted to portray his own musical vision and thus ABATUAR was born in 2013. You can identify a bunch of different influences in his music, a wild and savage form of Death Metal. And that was what he delivered in his first album, “Perversiones De Muerte Putrefacta” from 2017. Fast forward to 2020 and ABATUAR releases its sophomore album, “Mortandad”, again on the German label Dunkelheit Produktionen. The main aspect of ABATUAR’s music is still here. It is fast, heavy, raw and straight in your face. It blends the characteristic Latin American style from bands such as SARCOFAGO, CHAKAL and ATOMIC AGGRESSOR, some “War Metal” tinges and Cadaver’s detailed vision. “Mortandad” has a solid and dense Death Metal foundation with traces of Black Metal found in the violent blast beats and even fast Thrash Metal segments. It is a compact album; a sonic storm that grabs you and doesn’t let go for 30 minutes. Besides mainman Cadaver on drums and vocals, “Mortandad” features two guest musicians: Yigo (ATROFIA, HATROSS) on guitars and Anibal (HATROSS, ex – ENSLAVER) on bass and guitar leads. The drumming is varied and interesting, a perfect match for the twisted bass and guitar riffs. Cadaver’s vocals range from low and inhuman growls to a gurgling grunt and everything in between. A perfect fit for the overall atmosphere. One may say that there is a primitive feel to the album, but I think that comes from the production itself and not the composition. There is an inherent, very technical aspect to these songs that may be overlooked. The production is more polished this time, but it is still raw and punchy, reminiscent of some early 90s North and South American underground acts. Such a perfect fit for ABATUAR’s demented style of Death Metal. “Mortandad” proves again that ABATUAR know their craft. This one is a solid album that can be listened to repeatedly (songs average 3 minutes) and it will kick you in the face every single time. Whether you long for that specific 80s vibe or not, I can recommend this album to every Death Metal fan out there. Support the band at www.facebook.com/abatuar and get their album from www.dunkelheit-produktionen.de