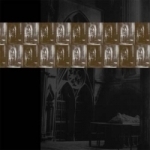 In times of re-unions also ABIGOR rose from its grave again and haunts us with a new album called “Fractal Possession”. Let me put this fact first, “Fractal Possession” is an extreme album, nothing for romantics, nothing for nature-freaks and nothing for the nostalgic ones. This is pure naked visciousness. Two things within ABIGOR have not changed: firstly, playing music on highest technical standards with crazed riffs / melodies and song-structures and secondly, creating this music for noone else’s but their own needs. The second point demands being open-minded to get into this album, because with Black Metal and also Death Metal as a basis, there are many non-Metal tunes worked into this basis such as Industrial- or Ambient-like- influences. People who can cope with MAYHEM’s later releases like “Grand Declaration Of War” or “Chimera” should also easily get into this album. This does not mean that “Fractal Possession” has overwhelming many similarities with those albums, it is just the way ABIGOR or MAYHEM express extremity in comparision how they did 10-15 years ago. So to pick up a couple of details, “Fractal Possession” is a really crazed album, the songs are interrupted by many breaks / samples, the speed switches from really fast into rhythmic parts just to return to high-speed again, partly also the other way around. Noteable are the guitar-leads which are more than one time played for serveral voices. One can say that this is for sure not an easy-listening album but really exhausting, I guess this was ABIGOR’s intention. No need to mention that the production is clean just as we are used to when it comes to ABIGOR. Disappointing are the vocals I think, because in comparision to the extremity of the music, the vocals often give the impression being too standard… www.infernalhorde.com/abigor/, www.e-a-l.com