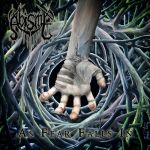 Three years active and still no entry in the Encyclopedia Metallum aka Metal Archives? Someone should definitely work on that topic, since “As Fear Falls In” is a strong debut by ABISME, hailing from Barcelona, Spain. The band’s name is of Catalan origin and means hell or abyss. Everything is done self-financed, from cover artwork to recording and mixing. The album, as far as I know the first release by ABISME, starts a little bit undecided. Or, to frame it in a positive way, the opening keeps the listener hooked and makes appetite for more. As the music evolves, at least when the vocals set in, it is clear where the journey leads. Death Metal, but it can not be pinpointed down to certain sub-genres or bands. An all-encompassing approach towards the different characteristics of Death Metal. Although the band is claiming Swedish Death Metal as an important influence, you will not get that typical HM2 buzzsaw sound. Instead the band plays fast, but not too fast. Slow, but not too slow. Technical, but not too technical. Some kind of sitting between the chairs, but I like it, since all is worked out fine and precise. To me the music sounds like a sempiternal and everlasting vision of Death Metal. The only song I do not agree with is the last one, called ‘The Struggle’. A classic instrument like the piano has always been part of extreme Metal, but as an intro, outro or interlude. And not, like in this case, as a stand-alone track with a running-time of nearly eight minutes. This song simply does not fit together with half an hour of Death Metal. But that is the only inconvenience of “As Fear Falls In”, so visit https://abisme.bandcamp.com or www.facebook.com/abisme.band for some well-seasoned Death Metal.