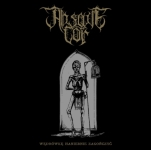 Sometimes, there are strange reasons why I decide to chose a certain album for a review. In case of ABSQUE COR, it was the fact that this band is not only from Poland (Mielec, to be precise) but also sings in their language. Thus, I thought my wife might help me a little bit with the translation of album and song titles. So much for theory. It was not that easy finding out about the meanings of the songs, especially since the vocals are quite hard to understand, even for a native speaker. But that’s another story, it’s just to keep you informed that I tried to translate the titles here, without too much warranties. As it is research before review, I found out that ABSQUE COR is not only from Mielec, but also one of those one man bands. The guy behind the band is called Vos, responsible for everything, of course. Usually, I’m not too excited about one man bands, and ABSQUE COR proved me quite right. “Wedrówke Haniebnie Zakonczyc” (“End of a shameful way”) is their first album, and Vos seems to be inspired by those Black Metal bands who feel close to mother nature. Stuff like early IN THE WOODS, ULVER or similar stuff came to mind. Yet, the tension of ABSQUE COR doesn’t reach the one of the inspiring acts. The opening ‘Jeden Ksiezyc Wciaz Wskazuje’ (‘A moon that still/always indicates’) starts off quite promising, but with ‘To Co W Czlowieku Nieuniknione’ (‘The unavoidable in man’), the tension starts to lower already. A huge problem is the enormous length of the four songs that run about eight minutes in average. The ten minutes long ‘Zdecyduj Wiec Sam, Która Wybierzesz Droge’ (‘You decide which path you chose’) is already hard to hear without letting the mind flow. A little change to the better seems to be the final track ‘Do Niezbawienia’ (‘Non salvation’ would be the closest translation), yet it doesn’t reach the suspense of the opening song. So, the album leaves quite an aftertaste of too few tension in contrary to some pretty fine approaches. If you’re into those “tree hugging” Black Metal acts (and I don’t mean them ambient bands), “Wedrówke Haniebnie Zakonczyc” might be an album of interest anyway, so visit https://absquecor.bandcamp.com or www.godzovwar.com