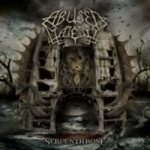 I received this CD in the same batch of promos as the NAUMACHIA record reviewed also in these very pages, and guess what: it is more or less the same disc, this time a little darker and more extreme yet no better as a result. I remember the days when Poland reigned supreme in the troubled world of Death Metal. Bands like DRAGON (listen to their “Fallen Angel” album, a pure masterpiece!), IMPERATOR, VADER, the mighty BETRAYER and the absolute gods — in my book of course– DAMNATION came out with something of their own and coped hard with shoestring budget and self-made gear to best their western counterparts. Those were the times of creativity and rage, precisely because of a very difficult environment. Now that the living conditions are way much better in Poland (fortunately of course) the insidious side effect is the apparition of legion and legion of extreme bands devoid of any personality. I mean, they could surge from Scandinavia or from the USA for all that we know, all these bands use the same two recording facilities (namely the Hertz and the Selani studios), play the same music and choose the same artists to illustrate their records. No wonder then one is left with nothing to say of interest about a particular record, as it is my case here. ABUSED MAJESTY play the generic form of vaguely Swedish melodic Death / Black Metal, symphonic oriented because of an unimaginative use of keyboards (played in layers of placated chords rather than in notes, I can do that myself with a toy synth). All feeling is lost in the process; I have the impression of talking about a hypermarket product and not of an actual album, a shame. The worse of all this is that I can’t even hate “Serpenthrone”, the musicians are great and the sound perfect. The best moments come when ABUSED MAJESTY resemble the Swedish project MUTANT, but even then, the Polish band can’t top their Scandinavian predecessors. I don’t want to lose that much time with this review; it is up to you to investigate on the ABUSED MAJESTY case. Not recommended in my camp.